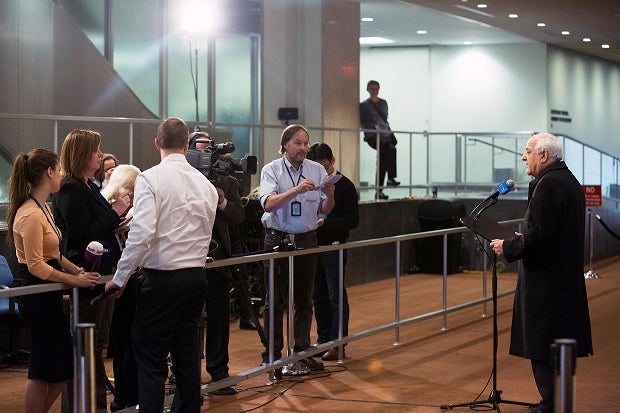 In this photo provided by the United Nations shows Riyad H. Mansour, Permanent Observer of the State of Palestine to the United Nations, speaks to the media after his meeting with the Assistant Secretary-General for Legal Affairs, Stephen Mathias, Friday, Jan. 2, 2015 at United Nations headquarters in New York. The Palestinians submitted documents to the United Nations to join the International Criminal Court on Friday, a high-stakes move that will soon enable them to pursue war-crimes charges against Israel. AP

UNITED NATIONS — Secretary-General Ban Ki-moon says the state of Palestine will join the International Criminal Court on April 1, a high-stakes move that will enable the Palestinians to pursue war-crimes charges against Israel.

The Palestinians submitted the documents ratifying the Rome Statute that established the court last Friday, the last formal step to becoming a member of the world’s permanent war crimes tribunal.

In a statement posted on the U.N.’s treaty website Tuesday night, the secretary-general said “the statute will enter into force for the State of Palestine on April 1, 2015.” He said he was acting as the “depositary” for the documents of ratification.

The Palestinian move has drawn threats of retaliation from Israel and is strongly opposed by the U.S. as an obstacle to reaching an Israeli-Palestinian peace deal.