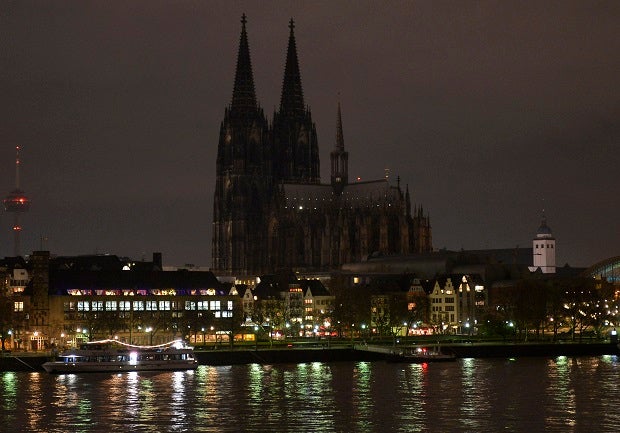 The illumination of the world famous Cologne cathedral goes out during a rally called ‘Patriotic Europeans against the Islamization of the West’ (PEGIDA) in Cologne, Germany, Monday evening, Jan. 5, 2015. The church wants to protest against intolerance of the anti Islamic movement, that came up in many German cities. AP

PARIS, France – Germany has become the latest European country to witness mass anti-Islamic protests which have grown increasingly common across the continent.

“In Europe in general, there is an anxiety, an anti-Islamic phobia, developing,” said left-wing activist and Green euro MP Daniel Cohn-Bendit.

He was referring to the latest protests by the Patriotic Europeans Against the Islamization of the West (PEGIDA) group that gathered an unprecedented 18,000 supporters to their rally in Dresden on Monday.

PEGIDA, which was launched only in October, rails against a range of enemies — not just Islam, but also the media (“all those liars”) and the political elite — that they accuse of diluting Germany’s Christian culture.

They have won support from admirers abroad, such as Tommy Robinson, former head of the far-right anti-Islamic English Defense League.

On Monday, he tweeted: “St George’s flags are flying in Dresden with PEGIDA. If I could be anywhere right now it would be Dresden.”

The protests have been denounced by Germany’s leading parties, with Chancellor Angela Merkel decrying the “hate” that fuels the participants.

“What’s remarkable is that the phenomenon is not caused by an (economic) crisis — Germany is doing well. And in Dresden, there are no Muslims,” said Cohn-Bendit.

He says images of violence by Islamic jihadist groups in the Middle East have frightened people even in parts of Europe where very few Muslims have settled.

“They have scared themselves with globalized television and the internet. That’s how you can live in the heart of Saxony and have the feeling that you’re under attack.”

The anti-Islam rallies were met by counter rallies.

The square around the Cologne Cathedral was plunged into darkness Monday evening after the historical landmark in western Germany shut down its lights in a silent protest of weekly rallies in Dresden.

The symbolic act came as thousands of Germans demonstrated in Cologne and several other cities against the ongoing protests by PEGIDA.

Cologne Cathedral provost Norbert Feldhoff, told n-tv that shutting down the lights was an attempt to make the PEGIDA demonstrators think twice about their protest.

“You’re taking part in an action that, from its roots and also from speeches, one can see is Nazi-ist, racist and extremist,” he said on n-tv. “And you’re supporting people you really don’t want to support.”

Fear of the Other

The story is a familiar one of fearing that which is not understood.

“When we don’t have contact with others, when we don’t know them, we are afraid of them,” said a European diplomat, speaking on condition of anonymity.

“We saw that with the referendum on minarets in Switzerland. Those who live in remote villages, and are therefore the least affected, they were the most hostile to minarets.”

But that has done nothing to offset genuine fears in many countries over the potential impact of mass immigration.

Even Sweden, proud of its liberal attitudes, has strained under the pressure of 100,000 asylum requests in a country of just 10 million.

It has seen the rapid growth of the extreme right Democrat Party which has played on concerns about immigration, while a number of fires at mosques have raised fears of mounting Islamophobia.

Meanwhile France, home to Europe’s largest Muslim population, is convulsed by a debate over supposed Islamization, with fears whipped up by the far-right Front National and a number of public intellectuals.

It was back in the media this week with the release of a new book by writer Michel Houellebecq which imagined the country ruled by a Muslim party in 2022.

Cohn-Bendit puts it down to a wider identity crisis as traditional cultures face rapid change.