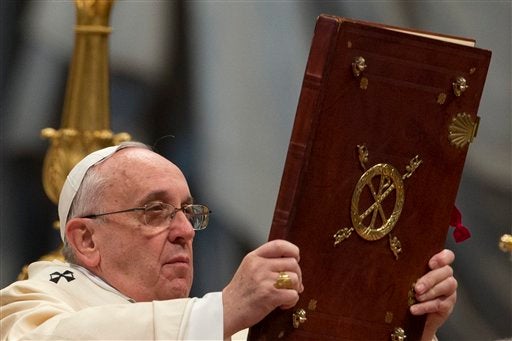 Pope Francis lifts the Holy Book as he celebrates a Mass to mark Epiphany, in St. Peter’s Basilica, at the Vatican, Tuesday, Jan. 6, 2015.  AP

MANILA, Philippines – The Philippine Air Force (PAF) will provide round-the-clock air cover for Pope Francis during the duration of his visit to the country to ensure his safety and security.

The PAF Chief, Lt. Gen. Jeffrey Delgado, said aerial cover would involve security air patrols to secure all routes to be undertaken by the Pope during his stay here from January 15 to 19.

Delgado said the PAF would limit the airspace for air cover to Metro Manila, and in Palo and Tacloban City in Leyte. It will also be a no-fly zone in these areas during the four-day visit and duration of the air cover.

The PAF was readying all helicopters and available assets to be used within the area for the air cover.

Armed Forces of the Philippines Chief of Staff Gregorio Pio Catapang Jr. said the military would deploy snipers in strategic positions and all over high-rise buildings along Roxas Boulevard to prevent any attempt to harm the pontiff.

Catapang said that 6,000 to 7,000 AFP troops would be deployed to secure the four-day visit while around 5,000 reservists would be tapped as back-up.

Defense Secretary Voltaire Gazmin said a total of 37,000 soldiers, policemen and AFP reservists would work to secure the Pope.

Speaking at a joint Department of National Defense – AFP traditional New Year’s call, Gazmin said the government has not monitored any specific threat to Pope, and to the holding of the Black Nazarene procession on January 9.

“So far, we have not monitored any threat against the activities that are going to happen. We have the coming Black Nazarene festivities plus the visit of the Holy Father. But we are looking into all angles, looking into all reports and act on these,” he said.

Catapang admitted that ensuring the Pope’s safety here was a big “security challenge.”

“It’s a security challenge in a way but we can do it. We will just make do of available forces. We are in joint forces with the PNP (Philippine National Police). The PNP will bring in the biggest contingent,” he said.

Catapang said that authorities were more concerned about the millions of people expected to converge during the Pope’s Mass at the Rizal Park.

“Our greatest worry is people surge that’s why we are putting up the barricade. The Pope is really very popular…Everybody wants to be near the Pope,” he said.