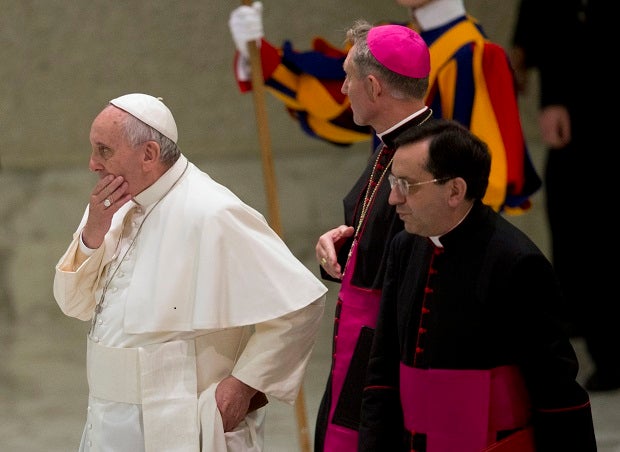 MANILA, Philippines – Hundreds of thousands of Filipinos who will find themselves on the fringes of Rizal Park during the Eucharistic celebration to be led by Pope Francis on Jan. 18 need not despair over not seeing the Argentine Pontiff from up close.

At a press briefing on Monday, organizers of the papal visit said Pope Francis had requested that he be allowed to roam around the 58-hectare Rizal Park so he could greet and bless the Filipinos prior to the Mass, the culmination of his five-day apostolic visit to the Philippines on Jan. 15.

To grant the Pope’s request, the organizers will make a papal route around Rizal Park that will be demarcated by concrete barriers in coordination with the Department of Public Works and Highways (DPWH) and the security committee, which includes the Philippine National Police and the Armed Forces of the Philippines, according to Rev. Rufino Sescon Jr., executive secretary of the papal visit committee.

“That’s what the Pope wants. Even in Rome, that is done. Before the Mass, the Pope goes around to greet the people,” Sescon said. “He wants to really meet and bless everyone because that will be his only chance [to do so].”

The Mass at the Quirino Grandstand is the only papal event in Manila that will be open to the public. The other events in the capital will be limited to a selected few due to tight space in the venues.

These “invitation only” events include the Mass at the Manila Cathedral in Intramuros, Manila, and the meeting of families at SM Mall of Asia Arena in Pasay City.

To allow the Pope to mingle with more Filipinos and at the same time ensuring his safety, 1.2-meter concrete barriers would be installed along Kalaw Avenue, Maria Orosa Avenue, Padre Burgos Avenue, Roxas Boulevard and the South Road, leading to the Quirino Grandstand, Sescon said.

Sescon noted that Pope John Paul II had also planned to get close to the people during a Mass at Rizal Park, which concluded World Youth Day in 1995, but the “human chain barriers” composed of policemen were not able to withstand the massive crowd at that time.

“[We] learned from that [experience] so we tapped the help of the DPWH,” Sescon said.

At least 18 giant LED screens will be put up along the stretch of Roxas Boulevard to Anda Circle to allow spillover crowds to see the Mass at Quirino Grandstand, he added.

About 1.2 million Filipino devotees would gather at Rizal Park but the figure could reach 5 million, counting those walking to and from the venue in the early hours prior the event, Communications Secretary Herminio Coloma Jr. said.

“Rizal Park has not expanded in the last 20 years since Pope John Paul II’s visit … as far as physical space is concerned, it can hold 1 million to 1.2 million people,” Coloma said.

“But considering the ebb and flow of the crowd, the numbers could go higher,” he added.

Unlike other big Church events when devotees are allowed to camp out days before, authorities would ban people from converging on Rizal Park prior the Mass on Jan. 18, Sescon said.

But the venue will be open to the public as early as 6 a.m. and closed at 1 p.m., on the instructions from the Presidential Security Group and the PNP, according to Sescon.

“They will secure the area days before so no one will be allowed to camp there. This is to make the event orderly and peaceful,” he said.

At least 20 first-aid stations and 400 portalets will be installed in strategic areas in the park. Some 20 ambulances will be ready to respond to emergencies, according to the organizers.

About 5,000 lay ministers have also been tapped to give Communion to the crowd in 20 chapels.

Five thousand ushers will be fielded to guide communicants to the chapels.

The Communion distributors and the ushers would carry white umbrellas bearing the seal of the Pope and the official logo of the papal visit for easy identification, said Rev. Alex Bautista, an architect who is also helping design the layout of Quirino Grandstand for the papal Mass.

To make the big event — which is expected to last for about two hours — peaceful and memorable for Filipinos, the Department of Health (DOH) is giving safety tips to devotees who will be at the Rizal Park for the Mass.

Assistant Health Secretary Gerardo Bayugo said devotees should not bring umbrellas to avoid obstructing the view of others. “Instead of umbrellas, we encourage them to bring fans to protect themselves from the sun or raincoat from the rain,” he said.

Bayugo also advised the public to bring plenty of water to prevent dehydration and those with chronic illnesses to bring their medicines with them.

Pregnant women, especially those expecting to give birth this month, are discouraged from attending the event. If they insist on going to Rizal Park to get a glimpse of the Pope, they should stay in areas where there would be few people, Bayugo said.

Parents are advised against bringing their babies. “If they must bring their children, we would recommend the ‘one adult, one child’ policy,” Bayugo said. “And please, no firecrackers and alcoholic drinks.”