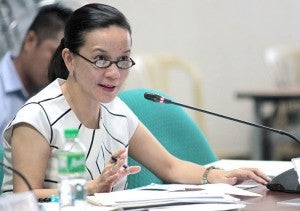 Both accused the Department of Transportation and Communication of putting one over the public by enforcing the fare increase of the Metro Rail Transit and Light Rail Transit right during the holidays.

The increase, they argued, was ill-timed because Congress approved allocations for MRT and LRT in the P2.606-trillion 2015 national budget, and that MRT has not fixed its glitches.

“It’s sad to think, but it appears they did something treacherous,’’ Poe said over dzBB.

“They have very bad services, and then they announced the increase while the public was on holiday, and they couldn’t go to court. For me, they’ve not been forthcoming on this,’’ she added.

Escudero observed that the government did not hold public hearings before announcing the increase.

“I don’t see any reason to increase the fare, financially and practically. As to its benefits for the commuters, there’s no basis,’’ he said in a separate interview over dzBB.

Poe, chair of the public services subcommittee, will invite Abaya and Abad to the resumption of the hearing on MRT glitches after Pope Francis’ visit this month and question them on the fare increase.

“He should be called,’’ she said of Abaya. “We can also call the DBM Secretary. Senator Chiz will be better enlightened because as finance committee chair, he knows the budget of the MRT and LRT.’’

Escudero said he would ask the public services subcommittee to tackle the fare increase at its next hearing.

“That’s one of the issues we will ask of them. If there’s still a way, we can try to stop, and ask for their commitment to suspend it,’’ he said.

Otherwise, only the public, not the Senate, has the power to stop the fare increase by petitioning the court, they said.

Beginning Sunday, LRT and MRT fares will increase by 50 to 87 percent. The new base fare would be P11, plus P1 for every kilometer.

Poe wondered why the DOTC imposed the increase after its 2015 budget, including allocations for the rehabilitation of the MRT and LRT, was approved, and without giving the public due notice.

“We have no quarrel that they need to raise it, but the timing isn’t right. MRT has poor services, and has yet to fix its glitches, among many others. Secondly, there’s not a whisper they’ll increase the fare. Thirdly, fuel prices have just gone down,’’ she said.

She also wondered why the DOTC did not inform lawmakers about the fare increase when it asked for subsidy in the supplemental budget.

“Why didn’t they tell us about this fare increase when we were deliberating their request for subsidy? That early, we could have removed this, and put it in the programs of the DSWD (Department of Social Welfare and Development) and DepEd (Department of Education),’’ she said.

“They never mentioned anything about fare increase,’’ he said.