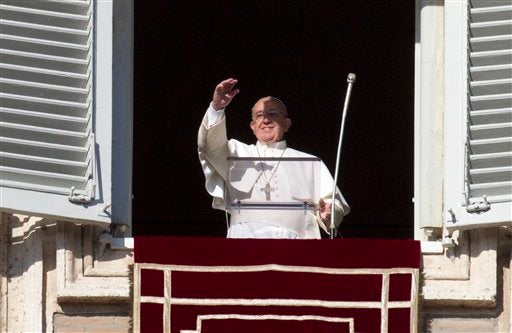 Pope Francis waves to faithful as he arrives to celebrate the Angelus noon prayer from his studio window overlooking St. Peter’s square at the Vatican, Sunday, Jan. 4, 2015. AP

VATICAN CITY — Pope Francis named 15 new cardinals Sunday, selecting them from 14 nations, including far-flung corners of the world such as Tonga, New Zealand, Cape Verde and Myanmar, to reflect the diversity of the church and its growth in places like Asia and Africa.

Other cardinals hail from Ethiopia, Thailand and Vietnam. Another is form Sicily, where the Church in recent decades has been galvanizing public rejection of the Mafia.

Referring to the Vatican, Francis told faithful in St. Peter’s Square that the churchmen come “from every continent” and “show the indelible tie with the church of Rome to churches in the world.”

In addition to the 15 new cardinals who are under 80 and thus eligible to vote for the next pope, Francis bestowed the honor on five churchmen older than that. He said they distinguished themselves for their work in the Vatican bureaucracy, in diplomatic service in giving witness to their love of Christ and God’s people. Those included men from the pope’s native Argentina, Mozambique and Colombia.

Speaking from a Vatican window to a crowd in St. Peter’s Square, Francis made another surprise announcement. He said that on Feb. 12-13, he will lead of meeting of all cardinals to “reflect on the orientations and proposals for the reform of the Roman Curia,” the Vatican’s administrative bureaucracy.

Francis is using his papacy, which began in March 2013, to root out corruption, inefficiency and other problems in the curia.