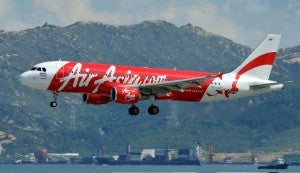 SINGAPORE—In the latest incident to hit an AirAsia flight departing from Surabaya, the engine of a plane failed just before it took off from Juanda International Airport in the Indonesian city, local news media reported.

The plane had been taxiing for 2 to 3 minutes before takeoff when the engine suddenly died, horrifying passengers, who heard a loud sound, Indonesia’s Metro TV reported.

Thankfully, the Bandung-bound plane made it back to the gate and the 120 passengers on board were then asked to disembark while the plane underwent repairs, Indonesia’s Metro TV reported.

Passenger Yusuf Fitriadi told Metro TV that a man clad in pilots’ uniform told passengers waiting at the terminal that the starter monitor had malfunctioned.

“The plane was ready and moved, but suddenly a loud sound was heard, the sound of the engine disappeared and the plane moved backwards. We were shocked and panicked.

“The plane was then pulled back to where it parked and we were asked by the stewardess to leave the plane,” the passenger was quoted by Metro TV as saying.

The plane was supposed to have departed at 9 p.m local time on Saturday.

Yusuf said that the airline later told passengers that the flight would be resumed after the issue had been attended to, but about 90 per cent of them refused to reboard the plane, fearing that the fault would reoccur during the flight.

AirAsia then refunded the plane fare of those passengers who had declined to continue with the flight, Metro TV reported.

Read Next
Boat carrying ‘copra’ sinks near Burias Island; all crew, passengers safe
EDITORS' PICK
Ahead of ONE: Full Blast II, Mongkolpetch warns Elias Mahmoudi: ‘Watch out for my fists’
Synology NAS: A photo storage and multimedia server for your home
DILG takes over Cotabato town as all officials go on quarantine
Local gov’ts may start COVID-19 vaccination of poor residents using excess supply
Tighter curbs sought in provincial COVID-19 hot spots
Alex Eala wins Grand Slam on Independence Day: ‘I hope I made my contribution to the country’
MOST READ
‘Hindi pwedeng take 2,’ Sotto tells presidential, VP aspirants
Lacson: Kind-hearted Leni ‘in it to win’ presidency in 2022, but…
Calida’s ‘mental calisthenics’
NCR Plus remains under GCQ from June 16-30
Don't miss out on the latest news and information.