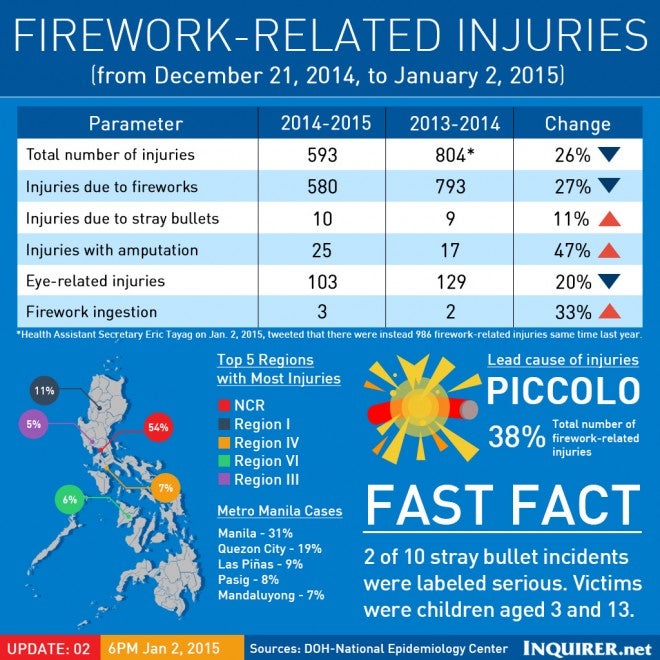 MANILA, Philippines—The Department of Health on Friday revealed that the number of fireworks-related injuries has surged to 593, according to its latest data.

Of the 593 cases, 580 have been recorded from December 31 to January 2, resulted from “direct” firecracker injuries, three were from fireworks ingestion, and 10 cases were due to stray bullet injuries.

The said figure is so far 393 cases lower than last year’s figure which hit 986.

Of the 593 cases, 465 cases were of those who sustained injuries which did not require amputations, 25 blast cases resulted in amputations while 103 persons suffered from eye injuries. 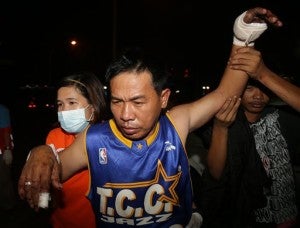 The Filipino man injured from firecrackers arrives at the East Avenue Medical Center in suburban Quezon city, north of Manila, Philippines Thursday, Jan. 1, 2015. Despite a ban by authorities on certain firecrackers due to injuries and death, many Filipinos still welcome the New Year with fireworks in the belief that it will drive away evil spirits and bring in good luck. (AP Photo/Aaron Favila)

Piccolo remains the leading cause of firecracker injuries, with 223 cases attributed to the said prohibited firecracker.

Out of the 10 stray bullet injuries recorded, two were considered by the DOH as “serious”: the cases of 13-year-old Maybelle “Mikmik” Juanitas who was hit by a bullet when she was walking to her aunt’s home at Tala, Caloocan City and a three-year-old male who was hit in the left eye while sleeping in their Cotabato City home.

Juanitas’ condition has been ruled as “stable” after the bullet slug and blood clot on her head were removed on Thursday. She was placed under observation for three days.

On the other hand, the three-year-old boy underwent an eye surgery and was declared “stable” as well.

According to National Epidemiological Center director Dr. Eric Tayag, the fireworks-related injury registry of the health department will continue collating data until January 5 at 6 a.m.

13-year-old girl critical after being hit by stray bullet