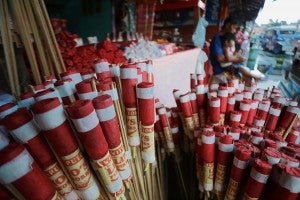 MANILA, Philippines-The Department of Health on Thursday revealed that lower number of fireworks related injuries have been posted as Filipinos celebrate the New Year revelries.

However, the number of amputations increased by 75 percent  or 14 persons compared to only eight last year.

The youngest victim to be amputated was a five-year old boy.

At a press conference, the DOH said a total of 351 fireworks related injuries have been recorded between December 21 to January 1, 2015, compared to the 578 cases posted last year during the same period.

Of the 351 cases, 346 was due to direct fireworks injuries, three persons have been hit by stray bullets and two persons ingested fireworks.

No death has been reported.

The National Capital Region posted the highest number of firecracker related injuries nationwide with 168 cases. 52 of the said cases transpired in the city of Manila.

Other firecrackers which brought injuries include kwitis, luces, and five star.

Garin attributed the high number of injuries caused by piccolo for two reasons: more kids use the said prohibited firecracker and its relatively cheap price allow children to share it with their friends.

“They are sharing danger,” Garin added.