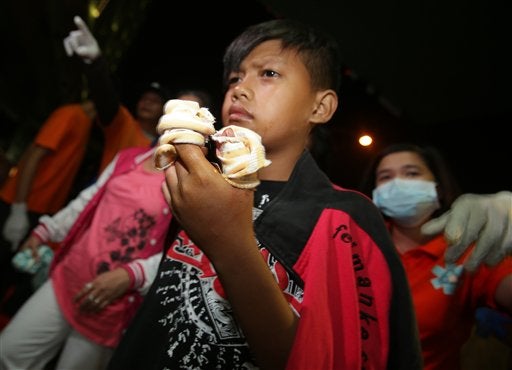 The 8-year-old had picked up and lit a firecracker that exploded and burnt four of his fingers.

“Thank God his face wasn’t affected,” his grandmother, Merlinda Prestosa, said in an interview outside the East Avenue Medical Center (EAMC) in Quezon City where she had rushed the boy after applying burnt ointment on and wrapping his right hand with gauze.

As classes were resuming next week, Prestosa said she had asked her grandson to get a haircut at a barbershop near their house in Krus Na Ligas, Quezon City.

But the Grade 3 pupil tarried and played with leftover firecrackers he had picked up on the street.

Dioquino was one of more than 50 patients treated at the EAMC for firecracker-related injuries during the New Year revelry that killed three and injured at least 354, according to initial figures released by the Department of Health (DOH) and the Philippine National Police.

In Tondo, barangay (village) watchman Edward Lagman, 28, sustained a single gunshot wound on the left side of his chest and died after undergoing surgery, according to a report by the Manila Police District.

In Cebu City, one-year-old Raymar Generoso died of cardiopulmonary arrest after being hit on the chest by a firecracker while on a motorcycle ride home with his father.

According to the Health department, at least 354 New Year-related injuries had been reported by different hospitals as of late Thursday afternoon, a 39 percent decrease from last year’s casualty figure of 578.

Data from 50 hospitals indicated that 166 of the cases were injuries from piccolo, 35 from kwitis (baby rocket), 23 from luces (sparklers), 12 from 5-star fireworks, and 27 were unknown, according to the DOH.

Metro Manila registered the highest number of casualties at 168, with the city of Manila reporting 52 cases; Pasig, 23; Quezon City, 21; and Caloocan and Navotas, 12 each.

The Health department, however, said it was still compiling the number of injuries, with the final count to be released on Jan. 6.

Hit on the chest

Generoso died after being hit on the chest by a firecracker thrown by Alex Amor, who later surrendered to the police and told investigators he did not intend to throw the firecracker at the victims.

Raymar and his father Chris Ryan Generoso were on their way home to Sibulan, Negros Oriental, and were passing San Lorenzo Street when a firecracker was thrown on the street and hit the boy on his chest.

Lagman was hit by a bullet while patrolling Kagitingan Street in Tondo just minutes after midnight of Jan. 1, according to police. The barangay watchman was rushed to the Gat Andres Bonifacio Memorial Medical Center where the victim died after surgery.

Clark Dizon, health emergency management service coordinator of the DOH Cordillera regional office, said the 11-year-old girl, whom he did not identify, died at the Abra Provincial Hospital seven hours after she was hit by a stray bullet in the head.

Stray bullets also wounded two men from Benguet and Apayao, while 39 cases of firecracker injuries were reported in Cordillera as of Thursday, with Abra posting the highest number at 13. Baguio City, where a firecracker ban was imposed, had eight blast victims.

An 11-year-old girl in Tayum town in Abra province, who was not identified, died hours after she was hit by a stray bullet in the head.

In Barrio San Jose, Caloocan City, what was supposed to be an endless videoke session with assorted cousins resulted in a hospital visit when a stray bullet hit Maybelle Lou Juanitas, 13, in the head.

“Initially, we thought she was hit by a stone,” said Evelyn Suan who immediately brought her niece to the hospital for treatment.

But the girl later started vomitting, prompting Mesa Juanitas to demand a CT (computerized tomography) scan for her daughter. Doctors found, and extracted, a bullet inside her head.

An 82-year-old woman was treated for blast injuries in her right hand after a firecracker exploded in the heap of dry grasses she was burning Thursday morning.

In Dagupan City, police were looking for a balikbayan from Italy suspected of firing a gun on New Year’s Eve. Senior Supt. Cris Abrahano said the resident of Diamond Village in Barangay Pantal went missing when police went to his house around 12:30 a.m. Thursday, following a call from a complainant. Found in his yard were six empty shells.

Despite the firecracker ban in Olongapo City, six people, including a 13-year-old boy, were taken to the James L. Gordon Memorial Hospital for firecracker blast injuries during the New Year celebration.

In Nueva Ecija, a public school was damaged while four motorcycles were burned after a row of firecracker stalls exploded in Guimba town Wednesday morning.

Police said the roof of several classrooms of the Guimba West Central School were damaged after the blast and resulting fire consumed more than 20 stalls on Faigal Street in Sto. Cristo district.

In Cavite, provincial health officer Dr. George Repique said that one of the injured was a case of gunpower ingestion.

According to data gathered by the DOH from 50 hospitals all over the country, 234 of those injured by firecrackers were “active users” while 91 were children aged 10 years and below.

Acting Health Secretary Janette Garin had urged local government units to ban the use of firecrackers. But so far, only the cities of Baguio, Olongapo, Davao, Kidapawan and Zamboanga have banned their use.

At the Tondo Medical Center, an 11-month-old baby was accidentally hit by a “kwitis” (baby rocket) that landed near his face and burned a part of his shirt.

Another young victim at the medical center was a one-year-old girl who suffered abrasion and lacerations on her lower back when a “kwitis” hit her diaper and exploded.

Though there were no stray bullet injuries in Pasay City, the local police said an indiscriminate firing incident had been reported by a resident of Cuneta Townhomes along Cuneta Avenue, Brgy. 76.