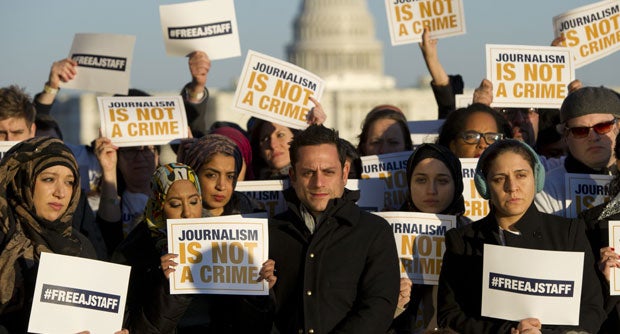 Employees and supporters of the television network Al-Jazeera hold up signs as they protest the imprisonment of Al-Jazeera journalists in Egypt, at the Newseum, near the US Capitol, in Washington, DC, February 27, 2014. AFP FILE PHOTO

CAIRO — An Egyptian appeals court ordered a retrial Thursday in the case of three Al-Jazeera English journalists held for over a year, overturning the ruling in a case that ensnared the reporters in a wider conflict between Egypt and Qatar.

The decision by Egypt’s Court of Cassation came after a hearing that lasted less than half an hour. However, Canadian-Egyptian Mohammed Fahmy, Australian journalist Peter Greste and Egyptian Baher Mohammed, who have been held their arrest in December 2013, were not released on bail.

The three journalists did not attend the brief hearing that began around 9 a.m. local time (0700 GMT, 2 a.m. EST) in Cairo. Reporters gathered to report on the hearing were not allowed in for those arguments, but later entered the court.

Defense lawyers said they believed a retrial for the three men would be held within a month and that they hoped for speedy trial given a changing political climate between Egypt and Qatar — believed to be underpinning the whole case. The Al-Jazeera satellite news network is based in Qatar, a country which recently promised to ease tensions in the greater Middle East by dropping its support for Islamist groups throughout the region, like Egypt’s outlawed Muslim Brotherhood.

Defense lawyers expressed relief over the retrial, though family members of those imprisoned said they hoped for their loved ones’ immediate release. Legal experts said releasing the men was outside of power of the Court of Cassation.

Lois Greste, Peter Greste’s mother, said after the hearing that the verdict was “not as good as we hoped.”

Adel Fahmy, Mohammed Fahmy’s brother, said he had hoped his brother would have been freed Thursday. He said each lawyer received three minutes to argue their stance on the case.

“I hoped for more today,” he said.

“This is a very good and optimistic decision. It will give them a second round of mitigation,” El Deeb said. “Hopefully when we go to the retrial, we can defend the defendants and present adequate support to try to set them free.”

Egyptian authorities offered no immediate comment on the ruling. The prosecutor who spoke at the hearing was not the prosecutor who initially tried the case, but rather one attached to the appeals court.

Authorities accused Al-Jazeera of acting as a mouthpiece for the Brotherhood after the July 2013 military ouster of Islamist President Mohammed Morsi. The station long has denied the accusations and said the journalists were doing their job.

“Baher, Peter and Mohammed have been unjustly in jail for over a year now,” Al-Jazeera said in a statement after the court’s decision. “The Egyptian authorities have a simple choice: free these men quickly or continue to string this out, all the while continuing this injustice and harming the image of their own country in the eyes of the world.”

Fahmy’s brother told reporters the journalists “should not be caught in the middle of this remote conflict between two nations.”

“They are the only ones paying the prices,” he said. “They are being punished on behalf of Qatar and Al-Jazeera.”

Fahmy and Greste were sentenced to seven years in prison at their initial trial, while Mohammed got 10 years — three more because he was found with a spent bullet casing. Rights groups dismissed the trial as a sham and foreign countries, including the U.S., expressed their concern over the journalists’ detention.

At trial, prosecutors offered no evidence backing accusations the three falsified footage to foment unrest. Instead, they showed edited news reports by the journalists, including Islamist protests and interviews with politicians. Other footage submitted as evidence had nothing to do with the case, including a report on a veterinary hospital and Greste’s past reports out of Africa.

Egyptian President Abdel-Fattah el-Sissi also has the power to pardon or deport the foreigners under a new law, whether or not the court grants the appeal. That would allow Greste to go home and would allow Fahmy to go to Canada if he drops his Egyptian nationality. Mohammed’s case would remain more uncertain as he holds only Egyptian citizenship.