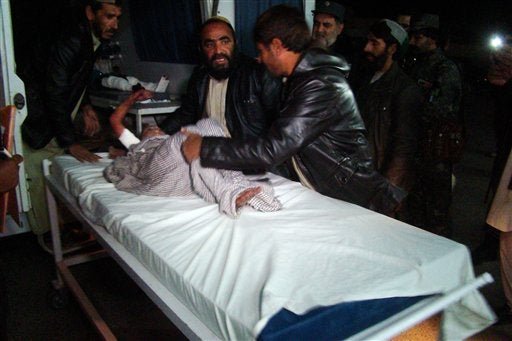 An Afghan wounded child is helped by people at a hospital in Helmand province, south of Kabul, Afghanistan, Wednesday, Dec.31, 2014. A rocket fired amid fighting between Taliban insurgents and Afghan soldiers killed at least 26 people at a nearby wedding party Thursday night, authorities said, a grim end to a year that saw the end of the 13-year U.S.-led combat mission there. (AP Photo/Abdul Khaliq)

LASHKAR GAH, Afghanistan — An Afghan official says police are investigating a rocket strike on a wedding party that killed at least 28 people, many of them women and children.

The deputy police chief of Helmand province, Bacha Gull, says the rocket strike late Wednesday appeared to have been fired from an army checkpoint near the house in Sangin district as guests waited for the bride to arrive.

Gull says police are “keeping an eye” on two army checkpoints to determine whether the soldiers manning them were engaged in a firefight with Taliban insurgents at the time or whether they fired the rockets arbitrarily.

Sangin, in the poppy-producing Helmand River valley, has been the scene of fighting between government forces and Taliban for the past six months.