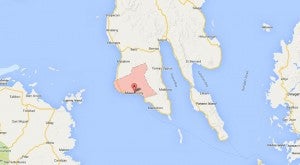 Philippine Coast Guard spokesperson Commander Armand Balilo said in a text message to INQUIRER.net that the pump boat capsized while the passengers clung onto it.

The boat went missing in the waters off Southern Leyte on Monday afternoon after it failed to return to Limawasa Island.

Balilo said the boat was found around 2:45 p.m. in Barangay (village) Sto. Rosario.

“The pump boat capsized with all the passengers clinging to it until they were drifted to the shoreline,” he said.

In a Philippine Coast Guard report, Danny Atienza, of the PCG Provincial Disaster Risk Reduction and Management Office, said the boat left Barangay San Roque, Macrohon at 2 p.m. Monday for its one-hour trip back to the island.

An earlier Inquirer Visayas report said that seven people were on the boat. One of the passengers was Limasawa Town Police official Richard Castañares.

Apart from Petanio, the six others were reportedly church workers who attended a religious function in Barangay San Isidro, Macrohon.

Limasawa Mayor Melchor Petracorta said one of the boat passengers managed to call her husband at about 4 p.m. and informed him that they were lost at sea. Heavy rain and big waves spawned by Tropical Storm “Seniang” (international name: Jangmi) were reportedly hampering visibility.

Southern Leyte was one of the provinces which suffered from the onslaught of Seniang.

As of posting, 21 people have been killed because of the storm according to the National Disaster Risk Reduction and Management Council.
All passengers went through a medical exam at Southern Leyte Provincial Hospital after they were rescued by the authorities.