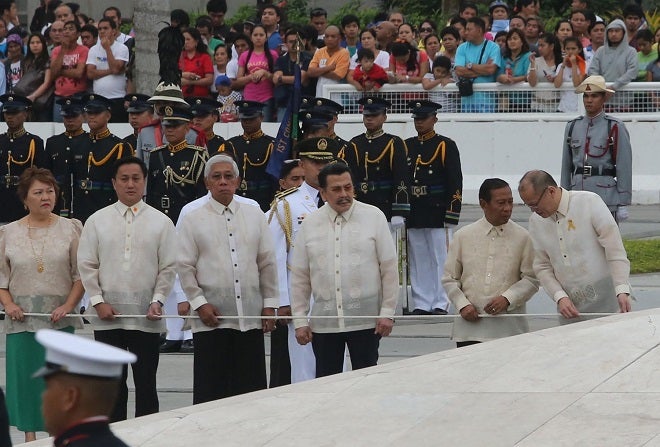 MANILA, Philippines – If there is one thing that Filipinos must remember about the late Dr. Jose Rizal, it’s his attempt to “uplift the circumstances of his motherland.”

“Rizal served as our precedent for prodigious acts: He took upon himself to alleviate the despair of others and cast his stake for a tomorrow of peace and liberty,” President Benigno Aquino III said in his Rizal Day message.

Aquino led the rites at the Rizal National Monument in Manila on Tuesday morning. December 30 marks the execution of Rizal by the Spanish colonizers. He was joined by Rizal’s descendants in a wreath-laying ceremony.

On the hero’s 118th death anniversary, Aquino said he hopes that the commemoration of Rizal’s life will “invigorate and impassion” the Filipino people as they aim for a progressive future.

“In his triumphs and sacrifice, we imbibe the inspiration to continue the fight for the Filipino,” the President said.

Touching on his own campaign platform, Aquino said Filipinos should follow Rizal and “walk the path of accountability and commit ourselves to the task of nation-building.”

“One of his advocacies was to use education in order to elevate the country and develop the people’s mentality, believing that only through education could the country be saved from domination,” he said.

Binay pointed out that quality education remains the “greatest equalizer” and tool against poverty.