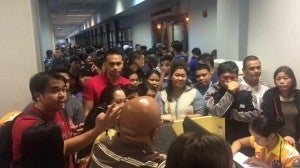 MANILA, Philippines—Aviation officials grilled Cebu Pacific Air executives during a hearing Monday on the chaos that marred the holiday rush at the Ninoy Aquino International Airport’s (Naia) Terminal 3 on Christmas Day and the following day.

Manila International Airport Authority General Manager Jose Angel Honrado was visibly irked by the claims of the Cebu Pacific executives that air traffic congestion at the Naia led to the flight delays and cancellations on December 24, 25, and 26.

The executives, led by the airline’s vice president for corporate affairs Jorenz Tañada, told aviation officials that air traffic congestion and the transfer of operations of five international airlines to Terminal 3 contributed to the flight delays and cancellations.

At the hearing were officials from the Civil Aeronautics Board, MIAA which runs the Naia complex, and the Civil Aviation Authority of the Philippines.

“Flight delays and cancellations were not NAIA’s fault. The problem is airlines were not taking off and arriving at their designated time. It’s a matter of timeliness,” Honrado said.

Honrado did not accept Cebu Pacific’s excuse, noting that 70 percent of the canceled and delayed flights from December 24 to 26 involved its planes.

“If the problem was air traffic congestion, how come it was just Cebu Pacific [which] had experienced it?” Honrado said.

Other airlines operating domestic flights had smooth operations during the holidays despite the influx of passengers.

“On December 24 as early as 4 a.m. to 6 a.m., when there was no congestion, how come Cebu Pacific had eight delayed flights?” Honrado said.

From Dec. 24 to 26, CAB noted a “massive dislocation of passengers” never seen in the past. Passengers hoping to fly out of Manila were not processed on time and many missed their flights due to unmanned Cebu Pacific counters.

According to MIAA, for those three days, more than 300 Cebu Pacific flights did not arrive and depart Terminal 3 on schedule.

Many passengers stood in long queues for more than three hours only to be told that they could not board their planes.

Honrado said some of the passengers that crowded the Naia 3 were those passengers who were dislocated the previous day and had hoped to be accommodated.

“Weren’t they at the airport because they were promised to be accommodated on that day?” Honrado said.

According to Cebu Pacific executives, the passengers were told that they could rebook with the airline for 30 days from the original departure date.

The airline also blamed the movement of five international airlines to the Naia 3, saying this limited the number of counters Cebu Pacific could use.

“The new terminal capacity is not as much as the Cebu Pacific can flex around with,” Junard Cruz, vice president for airport services, said.

Honrado said, however, that the airlines should be adjusting to the infrastructure and not the other way around.

CAB Executive Director Carmelo Arcilla noted that among the things that Cebu Pacific had to explain was the “high level of absenteeism” of its employees on those days.

At one point, CAB personnel reported that there were only two counters opened.

Monday’s hearing was held to determine if Cebu Pacific had any liability for the chaotic situation at NAIA 3 and if it had committed violated the rights of passengers.

According to the Air Passenger Bill of Rights, passengers have the right to accurate information, right to receive the full value of the service purchased, and right to compensation.

Read Next
PH national hero Jose Rizal revered in a version of traditional ‘pasyon’
EDITORS' PICK
CHR hopes inequalities exposed by COVID-19 pandemic are addressed
Smart offers wireless fiber-like speeds to Filipino homes with country’s first 5G Prepaid Home WiFi
This new condo in the South will make you want to turn a new leaf
Legarda: Ending Violence Against Women, a cause for all
DOH: Booster doses for fully vaxxed adults to start December 3
BOQ monitoring 64 travelers from ‘red-list’ countries amid Omicron
MOST READ
DOH: Booster doses for fully vaxxed adults to start December 3
Another disqualification petition filed against Bongbong Marcos
Ex-DOT chief Ace Durano convicted of graft over 2009 project
Roque defends Bongbong Marcos: ‘He was only 15 years old in 1972’
Don't miss out on the latest news and information.