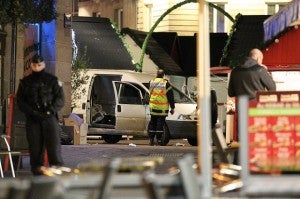 A police officer guards the van that crashed into a French Christmas market in Nantes, western France, Monday, Dec. 22, 2014. French authorities urged calm after a series of attacks across the country left dozens of people injured, and said there was no evidence the attacks were connected by any terrorist motive. AP

NANTES, France – A driver ploughed into a Christmas market in western France Monday, injuring 10 people before stabbing himself, a day after a man shouting “Allahu Akbar” ran down pedestrians in another French city.

At least four people were badly hurt in the latest incident in the city of Nantes, the third attack in three days by individuals against civilians or security forces in France, sparking fears of possible copycat action.

Authorities were quick to stress there were no apparent terrorist motives in the Christmas market attack.

On Sunday, a man drove into pedestrians on the streets of the eastern city of Dijon, injuring 13. The driver was suffering from a severe psychological disorder, a prosecutor said, easing concerns that the attack was inspired by Islamic extremism.

On Saturday, a man was shot dead by police after walking into a police station in the central town of Joue-les-Tours and attacking three officers with a knife. He too had yelled “Allahu Akbar”.

“We cannot speak of a terrorist act,” local prosecutor Brigitte Lamy told reporters at the scene of the latest incident, saying that initial evidence pointed instead to an “isolated case.”

Interior Minister Bernard Cazeneuve, speaking in Nantes, said the attacker appeared to be “unbalanced” and not motivated by politics or religion.

President Francois Hollande asked the premier to convene an emergency cabinet meeting on Tuesday to discuss the attacks.

Hollande has urged the French public not to panic while Prime Minister Manuel Valls reiterated an appeal for “cool-headedness.”

The latest attack happened in France’s sixth-biggest city at around 7 pm (1800 GMT) as people across the country thronged shops and markets in search of last-minute Christmas presents.

The van driver sped towards a chalet serving hot wine, where several people had gathered, a witness told AFP.

“I just saw the car charging into the stand, completely ramming into people,” an elderly woman said.

A source close to the investigation said that, after slamming into the shoppers, the driver stabbed himself “at least nine times,” causing himself serious injuries.

Lamy said the attacker was known to police and had not voiced “any specific demand.”

Investigators were examining a notebook found next to the white van, she said, adding that one of those injured was fighting for their life in hospital.

A source close to the investigation said the driver was 37 years old and had come into contact with the police in 2006 for theft and the handling of stolen goods and again in 2008 for vehicle damage.

The three attacks have jarred nerves in France after repeated threats against the country over its involvement in the fight against Islamic extremists in Africa and the Middle East.

The man behind Saturday’s attack in Joue-Les-Tours, identified as Bertrand Nzohabonayo, a Burundian convert to Islam, apparently shouted “Allahu Akbar”.

The phrase means “God Is Greatest” in Arabic and has been used by Islamist fighters in wars or by extremists when waging violent attacks.

Two police were seriously injured in the assault while a third officer was slightly hurt.

Sunday’s attack in Dijon by a man shouting the same slogan sparked fears of more attacks by individuals possibly responding to calls for violence by the Islamic State (IS) jihadist group that has swept through swathes of Syria and Iraq.

Nzohabonayo had posted an IS flag on his Facebook page last week.

A legal resident in France, he was known for petty crime but was not on a domestic intelligence watch list although his brother Brice, who was arrested in Burundi after the attack, is known for his radical views.

Nzohabonayo’s mother had told authorities in August last year that she was worried about Brice’s influence on his brother, Paris prosecutor Francois Molins said.

A prosecutor in Dijon said the 40-year-old driver of the car who targeted passers-by at five different locations on Sunday had been to psychiatric hospital 157 times and had no known links to jihadist groups.

She said he told police that he ploughed into people due to a sudden “outburst of empathy for the children of Chechnya” and had shouted “Allahu Akbar” to give him courage.

“He was not guided by religion but because he felt that politically he had to react,” she said.

The Islamic State jihadist group has repeatedly called for attacks against France, most recently in a video posted on jihadist sites.

Valls said Monday that more than 1,000 French nationals were involved in one way or another with jihad in Syria or Iraq, of whom 56 or 57 have since died.

“We have never known such serious danger where terrorism is concerned,” he said.