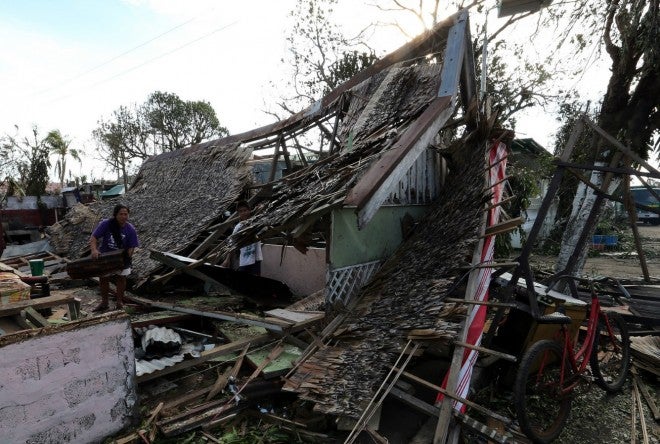 Teresita Quitorio salvages reusable materials from what is left of her house that was destroyed by typhoon Ruby (international name Hagupit) in Dolores, Eastern Samar. INQUIRER FILE PHOTO

“Intensive preparation has helped us keep people from the danger brought by Ruby,” Aquino told the locals in Borongan.

Aquino said the government is now shifting from relief efforts to recovery and rehabilitation stage. There are still 332 families in 44 Eastern Samar evacuation centers.

The President visited Dolores town and Borongan City, the areas hardest hit by Ruby, to check the government’s rehabilitation efforts.

Qualified families whose houses have been destroyed by the typhoon will also get P30,000 as emergency shelter assistance, Aquino said.

“In relation to this, we will no longer allow residents to build houses in danger zones. We have carefully studied their relocation area,” Aquino said.

The President, together with Social Welfare Secretary Dinky Soliman, also launched the government’s cash-for-work program worth P45.9 million for Dolores, which will benefit 11,772 families, and P68 million in Borongan, to benefit 17,457 people. They will work for P250 a day for 15 days.

Ruby claimed 18 lives based on data from the National Disaster Risk Reduction and Management Council. The typhoon also caused P5 billion worth of damage to agriculture and infrastructure.