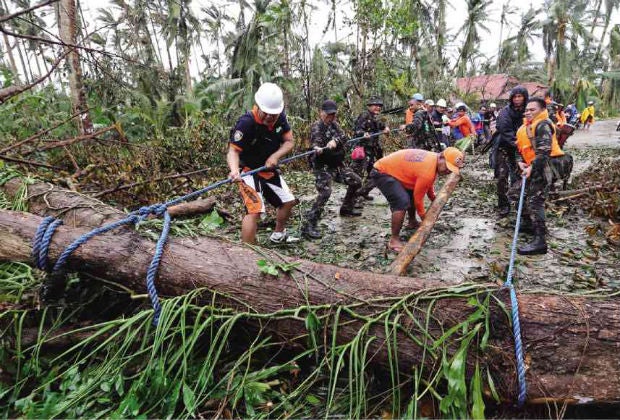 CLEARING UP Soldiers join workers from the Bureau of Fire Protection and the Department of Public Works and Highways in clearing fallen trees along the national highway in Taft town, Eastern Samar province. RAFFY LERMA

BORONGAN CITY, Philippines—Relief and recovery work went on full throttle on Tuesday after the main roads connecting this city to the southern and northern towns were cleared of fallen trees and landslides triggered by Typhoon “Ruby” (international name: Hagupit).

The Department of Social Welfare and Development (DSWD) set up additional relief hubs in Catarman, Northern Samar, and in San Julian, Jipapad and Maslog towns in Eastern Samar, for faster delivery of food packs to coastal municipalities, which bore the brunt of the strongest cyclone to hit the country this year. Ruby eventually weakened into a tropical storm, then to a tropical depression as it headed towards the West Philippine Sea for its exit.

Social Welfare Secretary Corazon Dinky Soliman appealed to the media to be more circumspect in its reportage of the calamity after a television network reported that the government had yet to distribute relief in temporary shelters in Borongan.

“Please let’s not make the situation more complicated than it has to be. It’s unfair, especially to our people who have not been sleeping since they started their work here,” Soliman said at the daily briefing of the Provincial Disaster Risk Reduction and Management Council (PDRRMC) here.

She said all the 22 towns and one city of Eastern Samar had received sacks of rice and food items even before Ruby made its first landfall in Dolores town on Saturday.

Soliman said a total of 7,350 50-kilogram sacks of rice and 7,400 food packs had been distributed in the province.

She said 33,960 food packs were set to be delivered in the coastal towns in the northern part of Eastern Samar.

Vice Gov. Marcelo Ferdinand Picardal said the provincial council declared on Tuesday a state of calamity to allow all government units to use their calamity funds to buy additional food items and other needs of the displaced residents.

Maj. Gen. Jet Velarmino, commander of the Armed Forces 8th Infantry Division, said personnel of the Department of Public Works and Highways and the military had removed felled coconut trees and other debris, which blocked the main supply routes in the province.

As of 9 a.m. on Tuesday, Velarmino said the national highways and main thoroughfares throughout the province were passable to all types of vehicles, save for a bridge in San Julian town, which was still close to big trucks.

Interior Secretary Mar Roxas, who flew to Borongan a day before Ruby unleashed its fury, directed the Philippine National Police to secure the DSWD and National Food Authority warehouses.

Roxas also ordered the police to man the seaports and other government infrastructures, which have been critical to the delivery of relief and rice rations.

“All the seaports and major supply routes are open. Our ‘conveyor system’ of delivering relief would continue until we reach each and every village in typhoon-ravaged municipalities,” he said.

“As what we have been telling you, we will not abandon you. We’re here to help you,” Roxas continued.

In Manila, the DSWD reported that around 15,000 food packs and other relief were being transported to provinces in the Calabarzon (Cavite, Laguna, Batangas, Rizal and Quezon) and Mimaropa (Mindoro, Marinduque, Romblon and Palawan) regions.–With a report from Julie M. Aurelio