US firefighters use oxygen to save cat 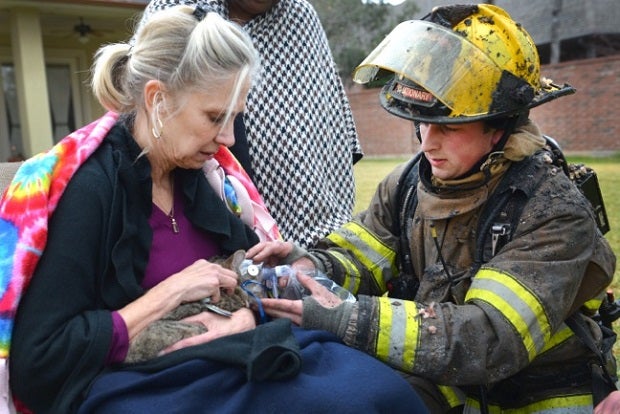 This Dec. 19, 2014 photo provided by the Fort Worth Texas Fire Department shows a firefighter providing oxygen to rescued cat from a house fire in Fort Worth, Texas. The Fort Worth Fire Department announced Saturday, Dec. 20, that the pet, named Stubby, survived. No one was hurt in Friday’s fire, which heavily damaged a home. Authorities are trying to determine what sparked the fire. AP

FORT WORTH, Texas — North Texas firefighters have used oxygen on a cat that was rescued from a burning house after the residents escaped on their own.

The Fort Worth Fire Department announced Saturday that the pet, named Stubby, survived.

No humans were hurt in Friday’s fire, which heavily damaged a home. Authorities are trying to determine what sparked the fire.

Lt. Kyle Falkner says firefighters found the cat while trying to bring the blaze under control. Stubby was extricated but had suffered from smoke inhalation, so firefighters administered oxygen via a mask.

The cat was taken to a veterinarian for further examination.

‘Pinay’: Cat found on freighter from Philippines to LA