Obama: North Koreans did it 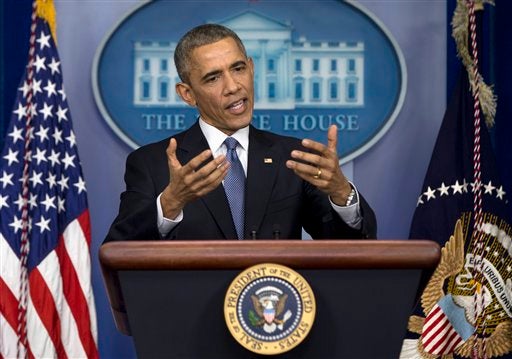 President Barack Obama speaks during a news conference in the Brady Press Briefing Room of the White House in Washington, Friday, Dec. 19, 2014. AP

WASHINGTON—US President Barack Obama has declared that Sony “made a mistake” in shelving a satirical film about a plot to assassinate North Korea’s leader, and he pledged that the United States would respond “in a place and manner and time that we choose” to the hacking attack on Sony that led to the withdrawal.

The FBI blamed the digital break-in on the communist government.

“I wish they had spoken to me first. … We cannot have a society in which some dictator someplace can start imposing censorship,” Obama said at a year-end news conference on Friday, speaking of executives at Sony Pictures Entertainment.

Sony said it had no choice but to cancel distribution of “The Interview” since theaters were refusing to show it. North Korea denied anew that it had hacked the studio.

On Saturday, the North proposed a joint investigation with the United States into the hacking attack, warning of “serious” consequences if Washington rejects a probe that it believes will prove Pyongyang had nothing to do with the cyberattack.

An unidentified foreign ministry spokesperson in Pyongyang said North Korea knows how to prove it’s not responsible for the hacking, so the United States must accept its proposal for the joint investigation.

“The US should bear in mind that it will face serious consequences in case it rejects our proposal for joint investigation and presses for what it called countermeasures while finding fault with North Korea,” the spokesperson said in a statement carried by Pyongyang’s official Korean Central News Agency.

“We have a way to prove that we have nothing to do with the case without resorting to torture, as what the CIA does,” he said.

The evidence implicating North Korea was previously described as largely circumstantial, including unspecified clues in the hacking tools left behind and the involvement of at least one computer in Bolivia traced to earlier attacks blamed on North Korea. Now, the FBI said, those clues included similarities to other tools developed by North Korea in specific lines of computer code, encryption algorithms and data deletion methods.

More significantly, the FBI discovered that computer Internet addresses known to be operated by North Korea were communicating directly with other computers used to deploy and control the hacking tools and collect the stolen Sony files.

“There is not any connection,” Kim Song, a North Korean diplomat at the United Nations told The Associated Press (AP). Song criticized the film but disputed his government had hacked Sony and orchestrated the movie’s shutdown: “It defamed the image of our country. It made a mockery of our sovereignty. We reject it. But there is no relation” to the hacking.

The US decision to openly blame North Korea—which involved agreement by the state department and intelligence agencies—escalated a global game of brinkmanship. It happened after the disclosure of confidential Sony

e-mails and business files and threats of terror attacks against US movie theaters until Sony agreed to cancel the Christmas Day release of its comedy, “The Interview.”

Obama spoke not long after the FBI provided the most detailed accounting to date of the digital break-in. The president’s pointed criticism of Sony shifted focus to whether the studio would modify its decision, as some leading celebrities—including actors George Clooney and Sean Penn—have recommended.

“Sony is a corporation. It suffered significant damage. There were threats against its employees. I am sympathetic to the concerns that they faced,” Obama said. “Having said all that, yes, I think they made a mistake.”

Sony Pictures chief executive Michael Lynton said it was the president who was mistaken, noting that Sony canceled the release only after all major theater chains decided not to show the movie. But the Homeland Security Department concluded those threats were not credible, and the top multiplex chains in North America dropped “The Interview” only after Sony informed them it would not protest if the theaters pulled the film. Representatives for Regal, AMC and Carmike did not immediately respond to request for comment on Friday.

“The president, the press and the public are mistaken as to what actually happened,” Lynton told CNN. “We do not own movie theaters. We cannot determine whether or not a movie will be played in movie theaters.”

Lynton did not indicate whether Sony planned to release the movie on DVD or through video-on-demand services, which are not controlled by theaters, but the company suggested that was an option in a statement late Friday.

“The only decision that we have made with respect to the release of the film was not to release it on Christmas Day in theaters, after the theater owners declined to show it,” the company said. “After that decision, we immediately began actively surveying alternatives to enable us to release the movie on a different platform.”

Obama spokesperson Jennifer Friedman responded that the White House was pleased to hear Sony is working to distribute the film. “People should be able to decide for themselves whether or not they would like to see it,” Friedman said on Friday night.

Lynton told CNN that though YouTube distribution is “one thing that we will consider,” no major video-on-demand or e-commerce site has stepped forward to offer to distribute the film. A DVD release falls into the same category.

As for the case against North Korea, the United States detected communications between computer Internet addresses known to be operated by North Korea and hacking tools left behind at the crime scene, which the FBI said contained subtle clues linking them to that country’s government.

The United States said in a statement: “North Korea’s actions were intended to inflict significant harm on a US business and suppress the right of American citizens to express themselves.” The statement included a general promise to impose “costs and consequences” on any person, group or government using cyberattacks to threaten the United States or its interests.

“They caused a lot of damage, and we will respond,” he said. “We will respond proportionally, and we’ll respond in a place and time and manner that we choose. It’s not something that I will announce here today at a press conference.”

The Japanese government declined to comment on Obama’s statements about the importance of freedom of expression and not surrendering to threats. It said in a statement e-mailed to the AP that Japan has been working closely with the United States on the hacking issue, and “supports the undertaking by the US.”

A Japanese analyst said blaming the theaters was a lame excuse, but added that Sony Pictures may be worried about further releases of proprietary data that could cause far greater financial damage to the company.

“Sony Pictures is a private-sector, for-profit undertaking,” said Jun Okumura, a visiting researcher at Meiji Institute for Global Affairs in Tokyo. “And what could Obama have offered that would have made the Sony executives change their minds? I wonder if he isn’t secretly relieved that they didn’t talk to him.”

In a taunting new e-mail, the hackers told Sony that executives were “very wise” to cancel the movie’s release and warned the studio never to release the film “in any form.”

In Hollywood, Clooney said the entertainment industry should push for the immediate release of “The Interview” online. In an interview with the trade site Deadline, he urged Sony to “do whatever you can to get this movie out. Not because everybody has to see the movie, but because I’m not going to be told we can’t see the movie. That’s the most important part.”

Penn said: “By caving to the outside threat, we make our nightmares real. The decision to pull ‘The Interview’ is historic. It’s a case of putting short-term interests ahead of the long term.”

The FBI noted in its statement that it worked closely on the investigation with “other US government departments and agencies.” Those included the National Security Agency (NSA), a person familiar with the case said, speaking only on condition of anonymity because some information NSA was providing in the case was highly classified.

Obama says Sony made a mistake in pulling movie on N. Korea