WASHINGTON—Suspicions that North Korea was behind a destructive hacking attack against Sony Pictures and a threat against movie theaters are intensifying calls for tougher US steps to cut that country’s access to hard currency and declare it once more as a state sponsor of terrorism.

At first glance, US options for responding to the hacking attack are limited. Bringing the shadowy hackers to justice appears a distant prospect. A US cyber-retaliation against North Korea would risk a dangerous escalation. And North Korea is already targeted by a raft of sanctions over its nuclear weapons program.

“We don’t sell them anything, we don’t buy anything from them and we don’t have diplomatic relations,” said William Reinsch, a former senior Commerce Department official who was responsible for enforcing international sanctions against North Korea and other countries.

But the US isn’t powerless if it concludes Pyongyang was behind the hack that has prompted Sony to cancel its Christmas Day release of the movie “The Interview.” 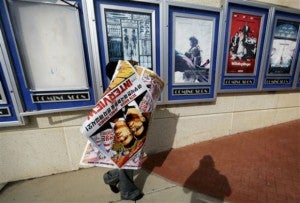 A poster for the movie “The Interview” is carried away by a worker after being pulled from a display case at a Carmike Cinemas movie theater in Atlanta. A hacking attack has prompted Sony to cancel its Christmas Day release of the movie. AP

While US officials are saying privately that they believe North Korea was connected to the attack, the White House has not said so publicly.

On Thursday, presidential spokesman Josh Earnest declined to blame North Korea, which has denied responsibility. He said he did not want to get ahead of investigations by the Justice Department and the FBI. Evidence shows the hacking was carried out by a “sophisticated actor” with “malicious intent,” he said.

Republican Representative Ed Royce, chairman of the House Foreign Affairs Committee, said he did not doubt North Korea was involved. He called for tougher US sanctions to cut Pyongyang’s access to hard currency, by excluding from the US financial system banks in other countries that hold North Korean funds.

“This is not a just a corporate security issue,” Royce told The Associated Press. “It is an act of aggression against the United States by a foreign government.”

Legislation for such banking sanctions, sponsored by Royce and the committee’s top-ranking Democrat, passed the House in the summer but was not taken up by the Senate. Current sanctions principally aim at preventing North Korea from trading weapons and acquiring nuclear and missile technology.

The Obama administration has been reluctant to embrace Royce’s approach. The biggest impact would be felt by banks in China, complicating US efforts to curry better ties with Beijing.

Evans Revere, former State Department official and specialist on Korea, said if US officials connect North Korea not only to the hacking attack but the threats to carry out 9/11-style attacks against movie theaters, a case could be made to put North Korea again on a list of state sponsors of terrorism.

That designation now is held by Iran, Sudan, Syria and Cuba.

North Korea was on the list for 20 years until it was taken off in 2008 by the Bush administration during nuclear negotiations. Royce said putting Pyongyang back on would be warranted.

While North Korea has denied it was involved, its government issued a statement earlier this month describing the hack as a “righteous deed.” The movie, a comedy, is about a plot to assassinate North Korea’s totalitarian leader, Kim Jong Un.

US detective work pointing to North Korea appears so far to be largely circumstantial, based on subtle clues in the hacking tools left behind and the involvement of at least one computer in Bolivia previously traced to other attacks tied to the North Koreans.

Still, the evidence has been considered conclusive enough that a US official told the AP that investigators have now connected the attack to North Korea.

Earnest said the investigation was progressing. He said President Barack Obama’s national security advisers were considering a range of options for a “proportional response.”

Victor Cha, who served as Asia policy director in the George W. Bush White House, said despite the long history of censuring North Korea over its weapons development, there’s no diplomatic playbook to follow in a case like this.

“On the nuclear and missile side we have established a pattern of interactions between states on how to respond, but in the cyber world there’s no rules right now,” he said.

Washington struggles to keep its interaction with North Korea on an even keel at the best of times, through periodic nuclear and rocket tests and dire threats of military reprisals. The US retains nearly 30,000 troops in neighboring South Korea.

Multination talks aimed at getting North Korea to give up its nuclear arsenal in exchange for aid have stalled for several years, and Pyongyang has been frustrated by what it considers a US reluctance to engage in dialogue. The animosity has built as the U.S. has supported a UN inquiry into North Korea’s dire human rights record.
RELATED STORIES