Senator Estrada mum on bid of 3 justices to inhibit

Detained Sen. Jinggoy Estrada on Friday refused to be dragged down by reports that Malacañang’s supposed attempt to influence the Sandiganbayan justices prompted them to withdraw from trying his plunder and graft cases. 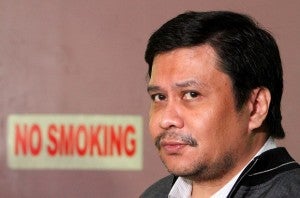 In a statement, Estrada expressed confidence that the members of the antigraft court’s Fifth Division, chaired by Associate Justice Roland Jurado, would decide on his petition for bail based on the evidence presented before them.

“I hope they will not succumb to [the pressure of] outside forces. I still have hope that I will be allowed to post bail,” Estrada said.

The senator also welcomed the decision of the Sandiganbayan en banc to thumb down the request of the Fifth Division justices to back out from the criminal cases brought against him in connection with the P10-billion pork barrel racket.

Along with Jurado, Associate Justices Ma. Theresa Dolores Estoesta and Alexander Gesmundo had asked their colleagues to let them inhibit from Estrada’s case over “personal reasons.”

After a full court session on Wednesday, the 11 justices told their colleagues to stay put and continue handling Estrada’s bail hearing.

“I fervently hope that the case proceeds smoothly without any similar surprises which tend only to prolong the disposition of the case,” Estrada said.

In a related development, the Fifth Division yesterday rebuffed Estrada’s request for a three-day holiday furlough for lack of merit.

In a two-page resolution, the court said the senator’s petition was similar to a motion he had filed asking its approval to allow him to visit the tombs of his deceased relatives last Nov. 1, which it also dismissed.

As a detainee, the court said Estrada should not be allowed to exercise his civil and political rights “just like all other detention prisoners.”

The court added: “We agree with the prosecution that to allow (Estrada) to leave his detention cell will not only set a bad precedent, but will likewise be regarded as a mockery of the administration of justice.”

Besides, the court said it would “entail additional and considerable government expenses” to secure Estrada if he was allowed to leave his detention cell at the Philippine National Police Custodial Center.

Estrada, who has been locked up along with Senators Bong Revilla and Juan Ponce Enrile since June, had wanted to spend time with his family on Christmas Day and on New Year’s Eve.

Jinggoy Estrada: I’m not to blame for case delay