Jinggoy Estrada: I’m not to blame for case delay 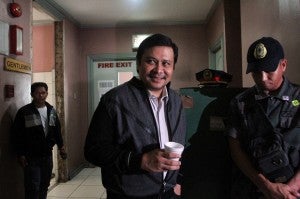 MANILA, Philippines–Sen. Jinggoy Estrada on Tuesday denied being the cause of the delay of the bail hearings for his plunder case, contrary to what prosecutors had been reportedly saying.

Estrada instead blamed the prosecutors as the ones hampering the speedy resolution of his bail petition.

In a statement, Estrada said it was in his interest to speed up his bail hearings, so there was no reason for him to slow these down. But he also said this does not mean he would not fight for his rights and would not oppose moves of the prosecutions that are contrary to law, fairness and justice.

“More than anyone else, it is I who desires to have a speedy trial. It is I who is currently detained, who is away from my family and who is unable to perform my duties as a duly elected Senator,” he said.

Estrada is currently detained on a plunder charge for allegedly getting kickbacks from his pork barrel funds which were funneled to a network of bogus non-government organizations run by suspected pork scam mastermind Janet Lim Napoles.

He said his legal team had informed the Sandiganbayan of his intent and willingness to attend extra hearing dates and even marathon hearings so his petition for temporary liberty could be resolved soonest.

His camp also suggested using judicial affidavits to expedite the proceedings, because, as one magistrate said, it could save 50 percent of the trial time, he said.

But the prosecution rejected the use of judicial affidavits, he noted.

He contended that the prosecutors were slowing down the hearings by calling so many witnesses.

“It is clear that the members of the prosecution panel are the ones slowing down the pace of the proceedings by presenting so many witnesses (according to one of the prosecutors: 26 all in all for the bail petition alone) whose testimonies have no probative value,” he said.