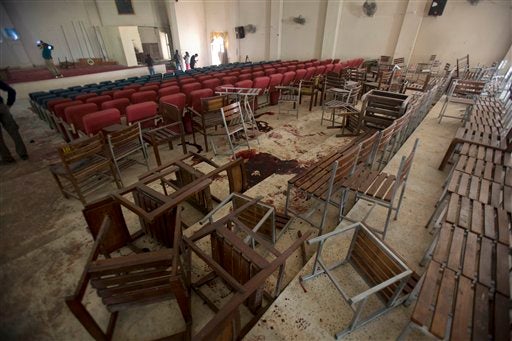 Chairs are upturned and blood stains the floor at the Army Public School auditorium the day after Taliban gunmen stormed the school in Peshawar, Pakistan, Wednesday, Dec. 17, 2014.  AP

MANILA, Philippines–In a tragic coincidence, the Taliban’s bloody attack on an army-run school in Pakistan occurred on the same day an international education group unveiled new guidelines aimed at protecting students and educators from armed conflict.

The Global Coalition to Protect Education from Attack (GCPEA), an organization concerned with the safety of students and educators during wartime, met in Geneva, Switzerland to release the Guidelines for Protecting Schools and Universities from Military Use during Armed Conflict.

The Taliban’s assault on Tuesday is the deadliest terrorist attack ever perpetrated in war-torn Pakistan, leaving 145 dead.

Most of the casualties were schoolchildren.

The GCPEA was established in 2010 by international educational organizations such as UNICEF, UNESCO, Human Rights Watch, Council for At-Risk Academics and other learning advocacy groups.

According to the GCPEA, armed forces have always gravitated towards educational facilities due to their sturdy construction, proximity to strategic locations and amenities such as functioning bathrooms, kitchens and spacious classrooms, qualities which combatants readily use for military purposes.

Zama Coursen-Neff, the director of the Children’s Rights Division of the Human Rights Watch, denounced the attack, which also drew strong condemnation among world leaders.

“The attack on a school in Peshawar in northwestern Pakistan that left at least 145 dead – almost all of them children – sets a new low of depravity for the Pakistani Taliban,” Coursen-Neff said in a statement.

“Between 2009 and 2012, there were at least 838 attacks on schools in Pakistan, leaving hundreds of schools destroyed. Worldwide, some 30 countries have experienced a pattern of intentional attacks on schools, teachers, and students in the last five years,” she explained.

“Other countries can demonstrate solidarity with the victims of the Peshawar school attack by not only expressing outrage, but by endorsing the Guidelines as an expression of determination that such attacks must come to an end,” Coursen-Neff said.

Tuesday’s massacre is the deadliest ever terrorist attack to occur even in war-torn Pakistan.

The Tehreek-e-Taliban claimed responsibility for the attack, saying that the offensive had the intention to make the Pakistani Army “feel pain” in response to the army offensive in the North Waziristan region of Pakistan.

Even the Afghan Taliban has released a statement expressing its denunciation of the attack carried out by their Pakistani counterparts.