Pope to eat ‘paksiw,’ other Filipino food during lunch in Leyte 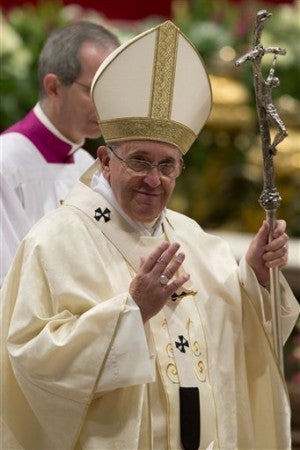 MANILA, Philippines – Familiar comfort food will be served during the visit of Pope Francis to Palo, Leyte, in January, so survivors of Super Typhoon “Yolanda” (Haiyan) need not step out of their comfort zone, according to church officials.

While nothing has been officially set, those in charge of food preparations would make sure that the dishes served during the much-awaited lunch on Jan. 17 would be familiar to all of the guests, said Fr. Rex Ramirez, executive secretary of the local committee on the papal visit.

Being considered for the no-frills feast that the survivors would share with the pontiff are pancit (local noodles), adobo and paksiw na isda (fish stewed in vinegar) or fried fish, according to Ramirez.

“Since majority of those who will eat are Filipinos, the dishes that will be served are those they are familiar with,” he added.

Ramirez said there were initial apprehensions that serving international food during the event might intimidate survivors unfamiliar with them.

“The problem with serving international food is that the people might not eat and [Pope Francis] might wonder why. That’s why they also have to be familiar with the food that will be served,” the Church official told reporters.

Since some people might have certain food allergies, meat and fish were deemed the safest entrees, the priest said. “But I am not really sure how will they be presented,” he added.

There will also be some international dishes on the menu, according to Ramirez, who added that a lechon might also be served, as no Philippine gathering would be deemed complete without it.

“When you say lechon, it connotes something special,” the priest said, but added that the dish would be chopped when served.

At least 30 survivors of “Yolanda” and the Bohol earthquake are expected to share a meal with the pontiff, 15 of them from Leyte; five from Tagbilaran, Bohol, and five from Calbayog City in Samar.

The Palo archdiocese earlier conducted a search for and secret interviews with “Yolanda” who would like to break bread with the Pope.

Pope Francis is expected to arrive at 9:30 a.m. on Jan. 17 at the Daniel Z. Romualdez Airport in Tacloban City, where he is scheduled to officiate a Holy Mass for some 200,000 devotees. He will then proceed to the archbishop’s residence for the lunch with the “Yolanda” and quake survivors.

The Argentine pontiff is known for his simplicity so organizers of his first visit to the Philippines on Jan. 15-19 are making sure that preparations match his taste for simple things, starting from the pope mobile (stripped of airconditioning) and the papal chairs.