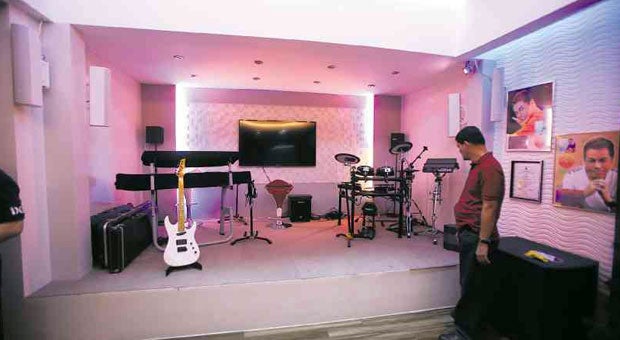 Convict Herbert Colangco’s room at the New Bilibid Prison (NBP) in Muntinlupa City rocks with a music studio. President Aquino has expressed particular concern over firearms found in the possession of 19 Very Important Prisoners during a raid on Monday that also uncovered their luxurious living conditions at the NBP. EDWIN BACASMAS

MANILA, Philippines–President Aquino has expressed particular concern over firearms found in the possession of 19 Very Important Prisoners during a raid on Monday that also uncovered their luxurious living conditions at the New Bilibid Prison (NBP) in Muntinlupa City.

Quoting Justice Secretary Leila de Lima who led the dawn raid, Communications Secretary Herminio Coloma Jr. said the President had given “specific instructions on the firearms discovered and it’s what worries him.”

The unit also had a sauna.

Coloma said the findings showed the “scale and depth of the illegal activities” taking place at the NBP, but the problem “could not be solved right away.”

“What’s important is to recognize the seriousness of the problem and the determination to provide a lasting solution so that reform would become permanent,” he told reporters.

The 19 inmates were temporarily transferred to the headquarters of the National Bureau of Investigation.

In the House of Representatives, Caloocan Rep. Edgar Erice has drafted a joint resolution urging Aquino to declare a military takeover of the NBP.

Erice said that under the Constitution, the President, as the Commander in Chief, was empowered to call out the Armed Forces to prevent lawless violence, invasion or rebellion.

He said the proliferation of criminal syndicates under the very noses of Bureau of Corrections (BuCor) officials required extreme measures, such as a temporary military takeover of the NBP.

“The very audacity of these prisoners to repeatedly violate the laws, disregard the policies of the NBP and treat the NBP premises as their own little kingdom stemmed from their connections to corrupt officials and personnel of the NBP themselves, in addition to their capacity to communicate with and pay hired gunmen for those who cannot be bought by their money,” said Erice.

Co’s jail room showed the extent and sophistication of illegal drug operations run by convicted drug lords from inside what was supposed to be a high-security facility. It even had closed-circuit television cameras.

Coloma admitted “weaknesses in our penology system,” which he said the government was addressing. He cited the planned construction of a “modern” detention facility in Nueva Ecija province.

“There are a lot of loopholes. There were many practices [at the NBP] that were allowed in the previous years and which the current administration is now identifying,” he said.

Asked if a BuCor shake-up was expected, the Palace vowed the “full extent of the accountability process.”

Coloma said the focus was to “completely stop illegal activities” at the NBP and ensure that it would be free from illegal drugs.

BuCor Director Franklin Bucayu revealed on Tuesday plans to construct a penal structure at the NBP that would enable authorities to, among others, isolate “high-risk” inmates who may have established ties with some corrupt prison guards, if any.

“One of our proposals is to construct a small-capacity jail structure that can accommodate 50 to 100 (inmates) only so that our colonies, like the NBP, can have a segregation capability,” he said over radio dzBB.

Bucayu later told the Inquirer that the BuCor had requested the Department of Budget and Management “long before” for P15 million for the construction of the structure, and that the money was “due to be released.”

“That’s what I’m coordinating with Ma’am, with (De Lima), that she guide us (in the release) of that budget, because the end of the year is almost here,” he said in the radio interview.

He told the Inquirer the construction of the structure would start “soonest” once the budget was released.

“And if we can finish (the construction of) the structure in three months, we do it,” he said, noting that the segregation could be done while the planned transfer of the NBP headquarters in Laur, Nueva Ecija, was not yet consummated.

Bucayu said he expected the completion of the new NBP headquarters in the province in 2018.

According to Bucayu, the segregation of high-risk inmates was important, as it would “cut the ties” that may bind them with some prison guards who could have a hand in the entry of prohibited items in their kubol.

“And if (these inmates) are in a controlled environment, they cannot move as much,” Bucayu said.

He said it was also “standard-operating procedure” in jail management that there be a segregation of inmates in the first place.

A “messy” situation was created because different types of inmates were together, the BuCor chief said.

“How do you approach that? If you have a Grade 6 student, he should be with fellow Grade 6 students. If (this is not the case), how will you teach?” he asked.

Bucayu said “if a highly violent inmate” was with other inmates, then “every day, there will be a mess.”

He added that the suicidal and the mentally ill should also be segregated in the structure that would be guarded by at least 120 prison guards.

“This is the strategy for a therapeutic and reformative intervention. And that way, we will be doing our job exactly (the way) people are expecting us (to do our jobs),” he said.

An NBP official said on Tuesday that the segregation of inmates was adopted in the past.

The policy was stopped after Building 14, where the high-risk inmates were isolated, underwent a renovation, said Supt. Celso Bravo, the NBP spokesman.

“So there’s no one staying in Building 14 anymore,” Bravo said over the phone. “It’s been a long time since nobody stayed there. I think more than six months already.”