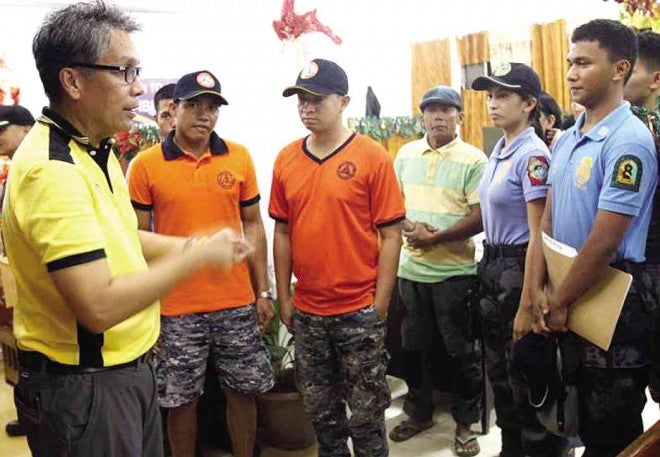 PRIOR to the distribution of food packs by the DSWD, Interior and Local Government Secretary Mar Roxas was first to arrive in Borongan, Eastern Samar, giving instructions to rescue and police personnel during preparations for the onslaught of Typhoon “Ruby.” CONTRIBUTED PHOTO

The packs were delivered to local officials of Northern Samar, Samar and Eastern Samar, said Soliman, who was here on Thursday.

She said her instruction to the local government units was to make sure that the packs are delivered, too, to families in remote villages and not only to those in evacuation centers.

“We don’t limit the distribution of food packs in the evacuation centers only but all the families in these areas,” Soliman said.

“We know that even before (Supertyphoon) ‘Yolanda’ and Ruby, these are already poor provinces,” Soliman said.

She said responsibility of distributing the food packs rests in local governments.

Ruby hit the provinces of Samar, Eastern Samar and Northern Samar on Dec. 6, displacing more than a million people.

At least 166,562 people are still in evacuation centers.

Soliman said these people would continue to receive food assistance from the national government until end of December.

The Department of Social Welfare and Development (DSWD) provided 104,365 food packs worth P66 million to the Samar provinces.

Mayor Romualdo Menzon, of Lapinig town in Northern Samar, raised concern about how the municipal government could provide help to evacuees once the DSWD stopped the distribution of food packs.

“We appreciate the assistance from the national government but this could not be enough,” said Aurelio Menzon, the mayor’s brother and spokesperson.

Lapinig is one the towns in Northern Samar that was hit by Ruby. More than 5,000 families were evacuated to the town hall, churches and at the Lorenzo Menzon Industrial School.