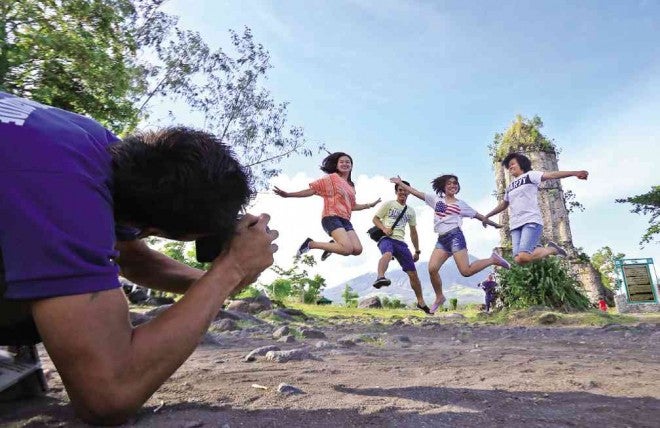 DARAGA, Albay—Tourism officials said restoration work must soon be done on the centuries-old Cagsawa Church ruins as it is in danger of collapsing should there be a strong earthquake or typhoon.

Aside from Mayon Volcano, the church ruins in Barangay Busay, Daraga town, is one of the most recognizable landmarks of Albay province.

Built by the Franciscans in 1724, the Cagsawa Church was toppled by a violent eruption of Mayon Volcano on Feb. 1, 1814, that buried some 1,200 people who took refuge inside the stone church. Although parts of the facade were left standing after the 1814 eruption, it is believed that these collapsed during earthquakes in the 1950s.

Today, only the belfry and some parts of the convent remain while a park has since been built around the ruins.

Cristina Agapita Pacres, Department of Tourism Bicol officer, said cracks had been found on the surface of the belfry while the stones on the facade are slowly being chipped away.

“The belfry is already in a leaning position,” she said.

Pacres said officials would also like to protect tourists from injury when they climb the belfry to take photos.