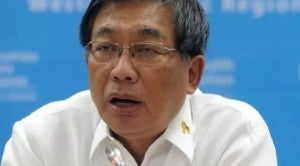 BUSAN, South Korea—Health Secretary Enrique Ona is being made to answer not just for issues concerning the government’s vaccination program, but also “three to four” other matters, President Aquino said here on Friday.

Ona is currently on extended leave while under investigation for authorizing the purchase of pneumococcal conjugate vaccine (PCV) 10 contrary to the advice of international health experts.

Asked when Ona’s leave would end, Mr. Aquino said he would first have to check when the investigation would finish because Ona was not being investigated only for the PCV 10 vaccine purchase.

He said there were three or four other items, but declined to provide details.

“And, if I remember correctly, at least two of those investigations have been concluded. I am waiting for my copy,” he said.

Ona has been criticized for purchasing the PCV 10 vaccines contrary to the recommendation to purchase the PCV 13 by the National Center for Pharmaceutical Access and Management, the Formulary Executive Council and the World Health Organization.

PCV 13 is supposedly more cost-effective because it covers more diseases compared to the PCV 10’s more limited coverage. PCV 10 is the cheaper of the two.

Ona has defended the purchase of the PCV 10 vaccine and has submitted to Malacañang his explanation for his decision.

He explained that considering that there was a debate on which was the better choice, he exercised his best judgement and issued a certificate to allow the government to purchase the cheaper PCV 10. He said his decision was intended to “optimize limited government resources.” Leila Salaverria