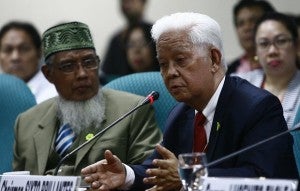 MANILA, Philippines—The Commission on Elections (Comelec) will probe almost 400 polling precincts over the presence of mysterious “digital lines” on ballots that could have affected the counting of votes through the precinct count optical scan (PCOS) machines in the 2013 elections.

Comelec Chair Sixto Brillantes, in a press briefing, disclosed that 383 polling precincts will be scrutinized to determine the actual cause of the digital lines and prevent its possible repeat in the 2016 polls.

“Our people are telling us this is a good number to determine the actual cause of the digital lines and to prevent it in 2016,” Brillantes said, adding that the precincts will be selected randomly in all provinces by the Digital Lines Committee recently formed by the commission.

Among those invited to participate in the investigation are staunch PCOS critics, Margarita “Tingting” Cojuangco and former Comelec employee Melchor Magdamo.

The digital lines reportedly appeared on some ballots and could have affected the counting of the votes because the lines had touched or bisected some of the ovals that voters had to shade to indicate their choice of candidates.

Because of the lines, a vote could have been counted for a candidate even if no oval was shaded, or it could have been nullified because of overvote. When extra ovals are shaded for a particular position, the PCOS machine does not count the vote.

The Automated Election System (AES) Watch earlier claimed that there was an electronic vote-shaving and -padding done in the 2013 polls through the use of “digital lines” that appeared in the PCOS machines, and accused the Comelec of trying to hide the issue from the public.