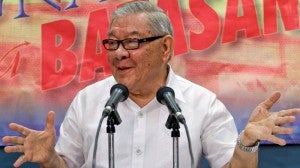 MANILA, Philippines–At least P5-billion worth of “amendments” will be inserted by the Department of Budget and Management (DBM) into the P22.46-billion supplemental budget it is seeking from Congress, ostensibly because the government had an excess of revenues.

But House Speaker Feliciano Belmonte Jr. said he “won’t allow it,” arguing that the House of Representatives would not condone an “errata [-filled] supplemental budget.”

“This [supplemental budget] was P23 billion, then they reduced it by P1.5 billion. Now, just because they have found new revenues, they’re saying they will increase it?” he said.

But late Tuesday, at the very first hearing on the supplemental budget, the appropriations committee chaired by Davao City Rep. Isidro Ungab voted 10 to 2 to approve the original P22.46-billion supplemental budget. The measure will be taken up in the plenary in the next few days for approval on second reading.

Earlier Tuesday, when the hearing opened, Budget Secretary Florencio Abad said his department would introduce the changes to reflect the additional income from corporation dividends and bond sales whose targets were exceeded this year.

He said the executive branch would like to take advantage of the excess revenues to use them to finance additional projects, mainly the reconstruction and rehabilitation of the areas devastated by last year’s Supertyphoon “Yolanda.”

As of July, she said income from dividends from government-owned and -controlled corporations had already reached P23.6 billion against the full-year target of P5.5 billion, resulting in an excess of P18.1 billion.

On the other hand, income from the bond-sinking fund, as of September, had already exceeded by more than P10 billion the government’s P37-billion target for 2014.

“These are already excess cash collections that are available now, meaning cash that has been remitted to the treasury,” De Leon said.

Abad said his department at first calculated that excess revenues would only be in the P23-P24 billion range. Hence, it asked for only P24.3 billion as supplemental budget for 2014, he said.

This was later lowered to P22.46 billion after the DBM slashed the P1.3-billion allocation for the hosting of the 2015 Asia Pacific Economic Cooperation (Apec) summit.

The supplemental budget consists mostly of allocations for the Yolanda rehabilitation efforts, as well as for unpaid or unfinished projects orphaned by the Supreme Court decisions striking down the Disbursement Acceleration Program (DAP) last July and the Priority Development Assistance Fund (PDAF) in 2013.

Abad told the committee that the high tribunal’s rulings on the DAP and the PDAF were two of three “supervening events” that prompted the DBM to ask for a supplemental budget. The third was Yolanda.

Asked why the DBM did not just use the unprogrammed funds in the 2014 budget, the official said “we could have resorted to unprogrammed funds… had it not been for the Supreme Court decision intervening in the process.”

Abad said the high court decision on the DAP—a stimulus program that the administration devised in 2011, but which the Supreme Court declared unconstitutional for, among other things, using savings before the end of the fiscal year and cross-border fund transfers—forced the DBM to propose a supplemental budget for “urgent priority programs.”