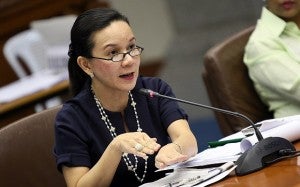 MANILA, Philippines–There may be a need for a uniform set of rules for the implementation of laws providing discounts and other benefits to senior citizens in light of reported incidents that they have not fully enjoyed these concessions.

This was expressed by Sen. Grace Poe, who has filed a resolution seeking a Senate inquiry to determine whether the senior citizens’ law and its expanded version have been fully and properly implemented.

The laws, which provide a 20 percent discount for certain items and services among other perks, was designed to benefit some 6.8 million Filipinos aged 60 and above.

“It has been reported that some business establishments have been denying our senior citizens of their full law-mandated discounts, benefits and/or privileges through numerous unjustified conditions or requirements,” Poe said in her resolution filed earlier this month.

She cited one restaurant’s alleged practice of giving senior citizens who order food for home delivery a flat P100 discount for a minimum order of P2,500, instead of the 20 percent discount mandated by law.

She said that in another incident, a senior citizen was denied a 20 percent discount in a hotel because he already received a discount from another promo.

Poe had also received reports that some senior citizens have failed to enjoy the mandated discounts because they were unable to show their senior citizen’s identification cards, even if they presented other IDs or documents stating their date of birth.

In shopping malls’ grocery stores, there were reports that cashiers do not ask for the purchase booklets and instead limit to a flat P65 the allowed 5 percent discount that senior citizens could get for prime commodities and basic necessities, regardless of the total value, she said.

According to Poe, it is the state’s duty to ensure that the law is being implemented. It is also part of its mandate to “value, respect, dignify and look out for our senior citizens who have long toiled to be where we are now as Filipinos and as a nation,” she said.

Poe urged the Senate to conduct an inquiry in aid of legislation on the issues, controversies and problems in implementing the senior citizen law, and which lead to various interpretations and compliance with it.

The objective is to formulate a uniform set of rules or guidelines for its effective implementation, she said.

She proposed that the inquiry be handled by the Senate committees on justice and human rights, and social justice, welfare and rural development.

Aside from discounts, other privileges that the elderly enjoy under the law include free medical and dental services, and diagnostic and laboratory fees in all government facilities, as well as educational assistance to pursue secondary, tertiary, post-tertiary or vocational courses.