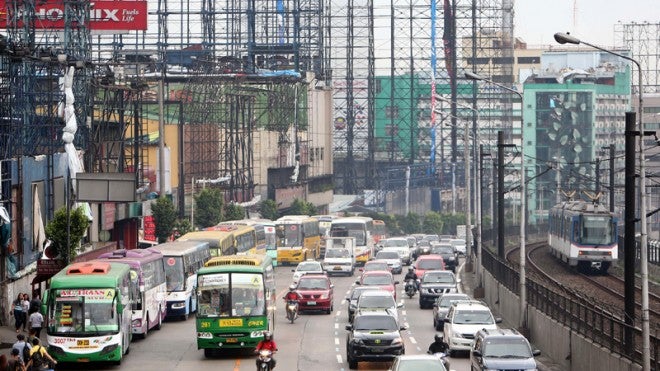 Metal structures along Edsa in Guadalupe, Makati City, are stripped naked of their advertising signs for safety in preparation for Typhoon Ruby. INQUIRER PHOTO/LYN RILLON

MANILA, Philippines—Millions of people in Metro Manila hunkered down Monday as Tropical Storm “Ruby” (international name: Hagupit) churned toward the southern tip of Luzon, just south of the capital, after hopscotching across islands in central Philippines over the weekend, leaving 21 people dead.

Malacañang expressed relief after initial reports showed Ruby had not brought destruction on the scale of Supertyphoon “Yolanda” (international name: Haiyan), which left 6,300 people dead, thousands either injured or missing, and tens of thousands homeless in Eastern and Central Visayas on Nov. 8 last year.

But although Ruby weakened as it churned toward Southern Luzon Monday morning, Malacañang urged the public not to let down its guard.

“We are all thankful that the storm has weakened, but it doesn’t mean that we should be complacent,” deputy presidential spokesperson Abigail Valte told reporters.

Ruby’s approach shut down government offices, schools and financial markets, grounded commercial flights and sea travel, and sent thousands of Metro Manila’s poorest residents who live in shanties along the coast and riverbanks into government-run evacuation centers across the metropolis.

President Aquino, who monitored the situation from his official residence in Malacañang, ordered the suspension of “classes at all levels and work in government offices.”

Not covered by the order were government agencies “whose work involves the delivery of basic and health services, disaster response, and other vital public services.”

“[The suspension order] was intended to give us time to prepare our families and communities,” Valte said.

In the capital Manila, home to 2 million people, Mayor Joseph Estrada ordered the evacuation of more than 5,000 residents of a shantytown on the edge of Manila Bay as weather forecasters warned of heavy rains from dusk.

“We are on a 24-hour alert for floods and storm surges,” Estrada said. “It’s the flooding that we are worried about.”

Malacañang warned traders against jacking up prices of basic goods to take advantage of the situation.

Valte said the Department of Trade and Industry (DTI) had seen no reason to raise prices, but had so-called caravans standing by to sell basic goods at discounted prices.

In Central Luzon, Bulacan Gov. Wilhelmino Sy-Alvarado ordered the evacuation of 45 families, or 156 people, living in the coastal village of Salambao in Obando town. He also ordered the suspension of classes at all levels, but required all government employees to report for work.

Classes were also suspended in other provinces in the region.

Officials also started to monitor Angat, Ipo and Bustos dams in Bulacan and the Pantabangan Dam in Nueva Ecija.

The National Power Corp. (Napocor) said no dam had released water as of 4 a.m. on Monday.

Bustos Dam, however, discharged excess water at 20 cubic meters per second last Friday to ease pressure on the reservoir and its aging equipment when its water elevation reached 16.45 m above sea level (masl). The dam’s spilling level is 17.7 masl.

Ruby, which reached supertyphoon force as it approached the Philippines last week, weakened into a typhoon as it slammed into Dolores town in Eastern Samar province on Saturday night then weakened some more as it crossed into the central islands of Masbate and Romblon on Sunday, bringing maximum winds of 149 kilometers per hour and gusts of up to 170 kph and moving at a slow pace of 10 kph.

The Philippine Atmospheric, Geophysical and Astronomical Services Administration (Pagasa) downgraded Ruby to tropical storm at noon on Monday after it made landfall in Torrijos town, Marinduque province, with reduced maximum winds of 105 kph and gusts of 135 kph.

By the time Ruby hit Laiya town in Batangas province at nightfall, Pagasa said it had further weakened, with maximum sustained winds of 85 kph and gusts of up to 100 kph.

Laiya was Ruby’s last landfall before it pushed its way into the West Philippine Sea, the weather bureau said.

Signal No. 2 over Metro

Metro Manila was expected to feel Ruby’s remaining force at around 11 p.m., when the storm’s eye was closest to the capital, Pagasa said.

The rainfall intensity was less than the heavy to intense rainfall over Metro Manila and Calabarzon earlier in the day, and far less than the torrential rainfall that Ruby poured on the Bicol region and Eastern Visayas over the weekend that caused extensive flooding.

Pagasa said the storm surge in areas near the center of the storm may reach up to a meter high.

But although Ruby weakened, it picked up speed, moving toward the West Philippine Sea at 13 kph, Pagasa said.

The weather bureau said stormy weather in Metro Manila and surrounding provinces would last until Wednesday morning. The weather will begin to improve as the storm leaves the Luzon landmass, Pagasa said.