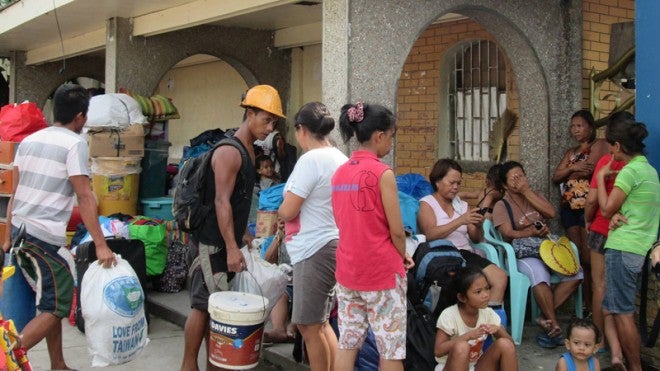 They took their three young children aged 8, 6 and 5 from their tent in Barangay 89 and moved them to the astrodome where they believed they would be safe from the wrath of a new strong typhoon.

“We have learned our lesson during Yolanda. We did not heed the warnings of the government as we chose to stay in our house and unfortunately, we paid dearly. We lost our younger brother,” said Mariel, 24.

Even local officials in the Visayas have learned from Supertyphoon “Yolanda” (international name: Haiyan).

Classes were suspended on Thursday and Friday in Southern Leyte, Leyte, Eastern Samar, Cebu, Bohol and northern Iloilo as well as in the cities of Catbalogan and Calbayog in Samar province.

At least 15,761 families in Tacloban and 3,000 in Eastern Samar started to evacuate on Thursday, two days before the expected landfall of Typhoon “Ruby” (international name: Hagupit).

Hotels in Southern Leyte and Leyte were fully booked as those with extra cash opted to stay in hotels rather than in evacuation centers.

But not the likes of the Jamots who brought with them their clothes and cooking utensils when they moved out of their tent in Barangay 89 and transferred to the astrodome.

The astrodome, which can accommodate 3,500 people, was among the identified evacuation centers for Ruby.

Although it is located at the back of the Cancabato Bay where the water rose to more than four meters during Yolanda’s wrath, the astrodome remained resilient.

“No less than the International Organization for Migration (IOM) declared the astrodome to be safe. It was not damaged during Yolanda except its roof,” said Idelbrando Bernadas, city disaster risk reduction management council officer.

Other evacuation areas in Tacloban were Eastern Visayas State University (EVSU), Leyte Normal University and Leyte National High School, which were not damaged by Yolanda.

Public schools in the northern barangays would also be used as evacuation sites after the roofs damaged by Yolanda had been repaired.

But the newly constructed public schools in San Jose District—the worst hit area in Tacloban—would not be used. Many of the public schools were wiped out by storm surges during Yolanda.

Ordered evacuated in Tacloban were the 14,000 families living in coastal areas, 61 families from Barangay 88 and more than 1,700 families staying in transitional and bunk houses.

But the threat of the typhoon triggered panic among the residents. Thousands of people trooped to stores to buy canned goods, candles, bottled water and batteries.

Hundreds of people were also seen forming lines at banks and gas stations.

Senior Insp. Bella Rentuaya, information officer of the Tacloban Police Office, said the city’s more than 200 police personnel had been deployed in downtown Tacloban to prevent looting like what happened a day after the onslaught of Yolanda on Nov. 8, 2013.

“Establishments that are prone to possible looting will be guarded by our policemen, composed of one team or about eight personnel,” Rentuaya said.

He, however, said that the evacuation of families would be a challenge because all of their identified evacuation centers like school buildings, barangay halls and even municipal halls sustained damage during the onslaught of Yolanda.

“There are no existing disaster-resilient structures in the province. This is really a big problem to us,” Nicart said.

In Cebu, at least 100 families who were still living in tents on the islands of Kinatarcan and Hilantagaan off Sta. Fe town were evacuated.

In downtown Cebu City, several stores had been replenishing their supplies of canned goods, rice, noodles and flashlights due to brisk sales.

Store supervisor Evelyn Ramos of Prince Warehouse said she noticed an increase in the number of shoppers buying flashlights and batteries since Wednesday.

“They are buying multiple flashlights and extra batteries. Because of how the consumers are reacting to Typhoon Ruby, our staff here are also panicking. They too bought their own supply of flashlights and batteries,” Ramos said.

In Iloilo, about 160 residents of Baliguian Island in Concepcion town were evacuated on Thursday to the mainland, about 25 kilometers from the island, according to Concepcion Mayor Millard Villanueva.

Villanueva said the residents were transferred to the mainland to avoid being cut off from assistance similar to what happened last year after the island was devastated by Yolanda.

Residents in the island-village of Malangabang also in Concepcion are also preparing for Ruby.

Thousands of fishing boats were destroyed in Iloilo last year.

Aquino on ‘Ruby’ preparation: We should be wiser after ‘Yolanda’