WHO lowers Ebola toll by nearly 1,000 after Liberia counting ‘error’ 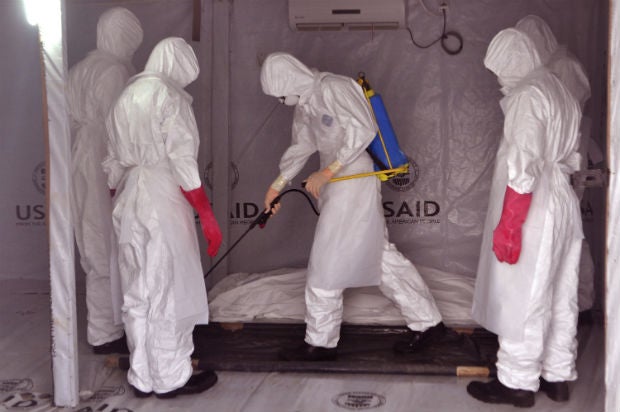 In this photo taken on Friday, Nov. 28, 2014, health workers wearing Ebola protective gear spray the shrouded body of a man with disinfectant as they suspect he died from the Ebola virus, at a USAID, American aid Ebola treatment center at Tubmanburg on the outskirts of Monrovia, Liberia. AP

GENEVA, Switzerland — The World Health Organization on Monday said more than 6,000 people had died from Ebola and not nearly 7,000 as earlier reported, blaming “an error” in numbers out of Liberia.

According to the revised data, the worst Ebola epidemic on record has now claimed 5,987 lives in the three countries at the heart of the outbreak in west Africa — Sierra Leone, Guinea and Liberia.

“An error on reported total number of deaths in Liberia was published on November 28. This number has been corrected,” the UN agency said in an emailed statement.

No further explanation was given for the revision.

When the agency gave its previous toll of 6,928 deaths on Friday, up from 5,674 two days earlier, it put the steep hike in Liberia fatalities down to “a reconciliation of historical numbers” and not to new deaths in recent days.

There have also been 15 fatalities in other countries, bringing the total to 6,002.

Also on Monday, the WHO said “meaningful progress” had been made towards reducing the spread of Ebola by isolating patients and burying bodies safely.

But Assistant Director-General Bruce Aylward said that a target for 100 percent isolation of patients and 100 percent safe burials by January 1 will be “challenging” to meet.

He warned that in Liberia there were signs of “a sense of complacency setting in”.

Filipinos to be screened for Ebola outside PH