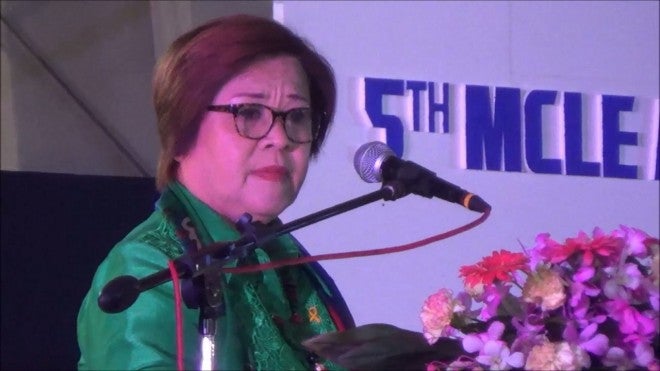 MANILA, Philippines–Justice Secretary Leila de Lima on Monday said she had authorized a revamp at the New Bilibid Prison (NBP) and the drug testing of personnel following a search-and-seizure operation over the weekend that yielded assorted communication gadgets.

De Lima, in an interview with reporters, said the reshuffle of custodial officers and personnel at the Bureau of Corrections (BuCor) would be “implemented right away,” and would cover the maximum, medium and minimum security sections of the NBP in Muntinlupa City.

“I already authorized a drug test of all custodial officers and personnel of the NBP,” she said.

Supt. Roberto Rabo, officer in charge of the NBP, said the reshuffle would be implemented “within the week.”

“We already have a list of personnel,” Rabo said.

BuCor Director Franklin Bucayu said the authorities were studying whether or not to implement a reshuffle in all the prison facilities under his office.

While this is being done, he said the strict measures being exercised in the NBP are already being implemented in other BuCor facilities.

These include stricter checking of visitors, implementation of a no-duty no-entry policy for personnel, and more stringent searches of packages.

According to Rabo, these searches have yielded results for the NBP, with authorities managing to dismantle “communication boosters” hidden on the roofs of some cells in the maximum security compound on Saturday.

“These can’t get inside without help. So we will crack down on erring prison officials and personnel,” De Lima said.

“We are tracing who owns these things that were discovered, how these were able to get inside, who brought them inside [and] who conspired with who to get these in. These gadgets can’t be brought in without assistance [from prison personnel]. These are not miniscule items that can be concealed,” she said.

The secretary said she was also awaiting the report of Bucayu about the incident, adding: “I’m asking for a formal report, including the actions being taken, or to be taken against the erring BuCor officials and personnel who may have been complicit with the inmates.”

“If the searches are conducted stringently on all items being brought inside the NBP, [contraband] will be discovered,” she said, adding that a probe was underway to find out who the intended recipient of the marijuana was.

De Lima said the drug testing will help weed out undesirables among the prison personnel.

The secretary cautioned, however, that if many prison guards and personnel would be relieved once they test positive or found complicit in the entry of prohibited items, the BuCor might have problems replacing them.

She said she hoped the adoption by next month of the new implementing rules and guidelines of Republic Act No. 10575, or the BuCor Act of 2013, would speed up the hiring process and increase pay rates in the corrections agency.

“The IRR is with me. I already finished reviewing it; [we’re] just cleaning up its final form,” she added.

De Lima said her office has adopted a “zero-tolerance policy” in the BuCor and will deal severely with erring prison guards and officials.

“I continue to closely monitor the actions being undertaken by the BuCor leadership to address the proliferation of prison-based illegal activities, especially drug-related activities within NBP and possibly other prison facilities. More operations shall be undertaken successively in the coming days and weeks. We are now adopting a policy of zero tolerance vis-a-vis such nefarious activities. BuCor officials and personnel found to be aiding or abetting such activities shall be severely dealt with,” De Lima said.