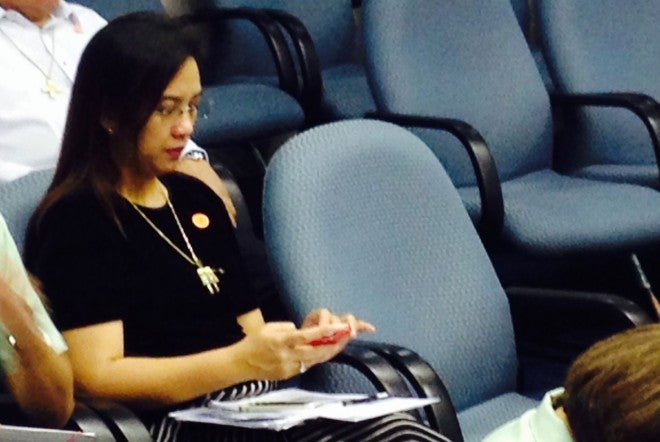 MANILA, Philippines–Acting Health Secretary Janette Garin should also take a leave of absence while the Department of Justice (DOJ) is investigating the P300-million National Agribusiness Corp. (Nabcor) fund anomaly, the lawyer of the alleged scam’s whistle-blowers said on Sunday.

Levi Baligod, lawyer of former Nabcor officials Rhodora Mendoza and Victor Cacal who exposed the scam, said Garin should do what Health Secretary Enrique Ona did. Ona went on leave following an investigation into the controversial purchase of vaccines by his office two years ago.

“Taking a leave, just what Secretary Ona is doing, is a personal decision showing he still has scruples. Those who lack it don’t,” Baligod said in a text message.

Both the vaccine purchase and the Nabcor scam are being investigated by separate teams of the National Bureau of Investigation, which is under the DOJ.

Garin has denied the whistle-blowers’ accusation that she received up to P1 million from the Ginintuang Masaganang Ani (GMA) program handled by Nabcor and that she diverted the money to her campaign kitty in 2007 when she was Iloilo’s representative in Congress.

“We want to see Garin deny the allegations under oath,” Baligod said.

The lawyer claimed that a handwritten note from then Nabcor president Alan Javellana was the main evidence against Garin. The note allegedly ordered Mendoza to give Garin money from the GMA funds.

Baligod said the affidavits of Mendoza and Cacal, as well as the document from Javellana, were among those they submitted to the DOJ in March. Also included were ledgers allegedly containing the bank accounts where the commissions were deposited.

The whistle-blowers implicated eight other politicians as having received at least P1 million from diverted GMA funds worth P105 million that were issued for “technical studies.” They claimed Nabcor funds worth about P300 million ended up in politicians’ pockets during the 2007 election period.

Mendoza was Nabcor’s former vice president for administration and finance, while Cacal was the general services supervisor.

Nabcor was among the government-owned and -controlled corporations abolished by President Aquino early this year after it was linked to the P10-billion Priority Development Assistance Fund scam.