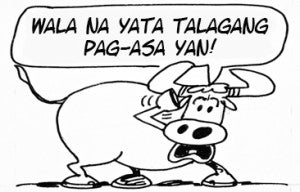 MANILA, Philippines–Next time a severe storm threatens to come ashore, go to the website of the US National Weather Service station in Hawaii. To be sure, you’ll learn whether the storm will hit your town and whether it’s bringing the whole Pacific Ocean along.

Your own weather bureau—the Philippine Atmospheric, Geophysical and Astronomical Service Administration (Pagasa)—is ill-equipped to warn you that another super typhoon like last year’s “Yolanda” (international name: Haiyan) is headed toward your general direction and that a storm surge is likely to wash out your town, according to the Commission on Audit (COA).

The COA has found that Pagasa lacks a special system for covering extreme weather conditions despite the government’s spending specifically to predict storm surges just months before Yolanda struck.

“The agency does not have an adequate early-warning system for storm surges to forewarn the public on the possible severe impact of a typhoon as powerful as Typhoon Yolanda,” the COA said in its 2013 annual audit report for Pagasa.

While Pagasa was adept at forecasting the trajectory and estimated strength of the incoming typhoon, it was weak in informing citizens about the “severity of the impact or the massive devastation it could possibly inflict on high-risk communities along its path,” the COA said.

The COA said Pagasa spent P80 million for the “System to Identify, Quantify, and Map the Storm Surge Threat to Philippine Coasts,” one of the components of the Nationwide Operational Assessment of Hazards (Noah) program early last year. But the absence of specific and measurable targets and outputs made it difficult for auditors to evaluate its success, the COA said.

Three months before Yolanda struck, the COA said, Pagasa embarked on storm surge forecasting programs with Noah. The COA also noted that the United Nations Development Program conducted a storm surge information education and communication campaign in the Samar-Leyte area from 2007 to 2008, which was attended by local government officials and teachers. “Maybe this was not enough or [was] forgotten,” the COA said.

The COA also reported that modernization projects funded with P425 million from the Disbursement Acceleration Program (DAP) had not yet been completed since the funds were released three years ago, “delaying the establishment of facilities/equipment urgently needed for early warning systems and climate change adaptation, which aims to prevent/mitigate the impact of extreme weather phenomenon on hazard prone areas or communities.”

The projects—the establishment of a National Meteorological and Climate Center (NMCC) worth P275 million and the upgrading of doppler radar networks in Palawan, Iloilo and Zamboanga, worth P150 million—were endorsed and funded as early as October 2011, the COA said.

“Late construction of the buildings and towers might pose problems once the Doppler Weather Surveillance Radars are delivered. [The radars are] due in April 2015,” the COA said.

The NMCC is part of the Philippines’ commitment to the Hyogo Framework for Action, agreed upon in the 2005 World Conference for Disaster Reduction in Kobe, Japan. The framework is aimed at reducing disaster loses by 2015 by building the resilience of nations and communities to disasters.

As of end-2013, the COA said, Pagasa has yet to start construction on its building on BIR Road in Quezon City due to its failure to comply with zoning requirements—it was designed to have only four floors but the minimum in the area was pegged at six floors.

The COA said the completion of the projects was “doubtful,” with only a year left in its deadline for completion.

“The Philippines is alarmingly exposed to frequent and severe natural hazards/disasters and the government doesn’t have the luxury of time. And every delay in the completion of projects implemented, which are meant to significantly reduce not only economic losses but also loss of lives and properties, spells disaster. Thus, officials concerned must act with urgency,” the COA said.

Pagasa Administrator Vicente Malano does not agree with the COA findings. Reached by the Inquirer on Sunday night, he said he was preparing a formal reply to dispute the COA report.

Malano said that before Yolanda hit in November last year, Pagasa had been working with the Department of Science and Technology and the University of the Philippines under Project Noah for a numerical modeling of storm surge prediction before a storm hits.

“So it’s not true that we have not done anything,” Malano said.

On the use of the DAP funds, Malano said that of the P425 million, P345 million went to the Department of Public Works and Highways to build three radar station buildings and a bigger weather center at the Pagasa compound in Quezon City.

He said Pagasa had already used P85 million of the DAP funds it received to buy the radar for the completed Iloilo building.

Malano, however, acknowledged that the Zamboanga radar station is unfinished and that work on the Busuanga building and the planned NMCC has not yet begun.–With a report from Dona Z. Pazzibugan