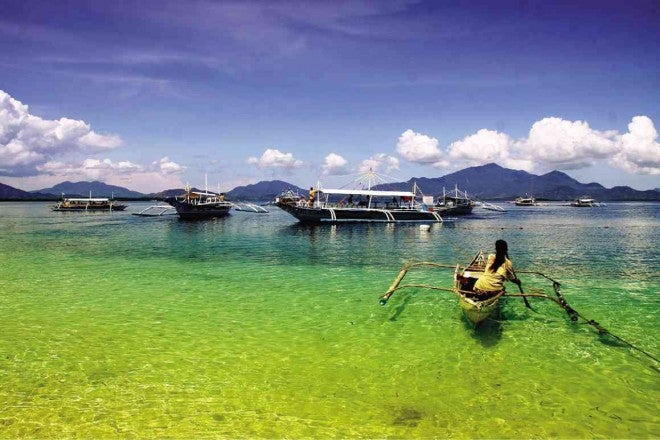 PUERTO Princesa City, which hosts tourist destinations like Honda Bay, is seen to be vulnerable to strong typhoons. LEO SOLINAP/CONTRIBUTOR

PUERTO PRINCESA CITY—This bustling city of tourism and in-migration is a sitting target for the next major climate catastrophe, according to a study released this week by World Wide Fund for Nature (WWF) in the Philippines.

WWF-Philippines president Lory Tan told city officials and stakeholders that results of the study on the vulnerability of Palawan province’s main city proper showed that its economic hub, which is largely based on tourism, is concentrated in low-lying areas vulnerable to strong typhoons.

Tan, who presented the results to officials here on Nov. 28, warned about the increasing threat of east-borne supertyphoons that place major installations, notably its seaport and airport crucial to the local economy, directly in the destructive path.

The city’s urban development, the study noted, has been solely concentrated in the low-lying eastern part that is now vulnerable to sea-rise phenomena.

“Unless this historical [weather] pattern shifts, the city should take a long, hard look at its western options. Although Puerto Princesa straddles both the east and west coasts of Palawan, most development is confined to its eastern geographies. This is concentrated risk,” the study warned.

Mayor Lucilo Bayron brushed aside the warning, saying he was confident that the booming local economy would somehow allow Puerto Princesa to respond well to threats of calamities.

“We have a new [SM mall] being constructed, our airport is being expanded and we are increasing tourism investments,” Bayron said.

He announced that one new private-sector-initiated project to build an ocean park that features “imported captive dolphins” in Camia Bay Resort would draw more tourists.

Unlike Tacloban City in Leyte province, which was unprotected by natural barriers when Supertyphoon “Yolanda” struck, Puerto Princesa’s coastlines are fringed with mangroves and barrier reefs. However, Tan noted that these natural barriers were now subject to degradation by climate change.

“Coral reefs that fringe the city’s coastal zones, as well as the artisanal fisheries that rely on reef productivity, will be exposed to El-Niño-related phenomena, such as rising sea temperatures. Back in 2010, the first reported spike of ocean acidification came from Palawan’s waters,” Tan said.

Tan noted that the commonly held belief over the decades that Palawan’s capital is immune from typhoons is no longer true.

“Puerto Princesa is certainly not typhoon-free. Over five decades, 98 storms have tracked through the city, an average of two storms per year,” he said.

The study described the local economy as being highly dependent on tourism and food imports, thus making its ports very crucial to the economy.

It also pointed out the fast increasing population density, driven by in-migration or the flow of people coming from other places in the country.

Tagging the city as a “migratory sink,” the study noted the population increase of 142 percent over two decades, translating to a booming 7.1 percent per year.

the Management of Climate Change Impacts,” was a broad assessment of major city centers that may be affected by climate change phenomena.