ARMM getting ready to make way for Bangsamoro transition body 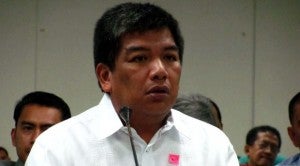 COTABATO CITY, Philippines—President Benigno Aquino is to attend what is expected to be the last state-of-the-region address of Governor Mujiv Hataman of the Autonomous Region in Muslim Mindanao on Monday, officials said.

ARMM Executive Secretary Laisa Masuhod-Alamia said all is set for the momentous event, including an elaborate security plan for the presidential visit and attendance of foreign dignitaries and key government officials.

Organizers of the last ARMM state-of-the-region report said among the surprises Malacañang might spring during the event could be an announcement on, if not the installation of, the Bangsamoro Transition Authority.

ARMM Environment Secretary Hadji Kahal Kedtag, one of three officials on the list of Hataman’s escorts to the Regional Assembly for the address, said he has been informed that a delegation from the Moro Islamic Liberation Front would also be attending the event.

Two days before the scheduled event, government security forces had already started stricter measures on entry of vehicles and pedestrians to the 11-hectare government center of the ARMM here.

On Saturday, early morning joggers found that the usual “hataw” free-for-all physical fitness activity inside the complex had been canceled, and police officers said this was due to the preparations for Mr. Aquino’s visit.

Other ARMM officials said they were expecting some surprise announcements from the President as he did in a previous visit to the ARMM complex.

They said one of the surprises could be on the expected transition to the Bangsamoro government, which was the product of the peace process.

Hataman, in return, was expected to report on his administration’s accomplishments, including development plans for the future Bangsamoro political entity.