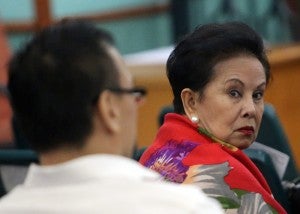 MANILA, Philippines–State prosecutors opposed the decision of the Sandiganbayan to defer the arraignment of Dr. Elenita Binay, wife of Vice President Jejomar Binay, for graft and malversation charges.

“Having presented no justifiable reason to further suspend the proceedings in these cases, the accused-movant’s plea deserves denial,” the prosecution said in its opposition filed in the antigraft court’s third division.

According to the Rules of Court, a pending petition cannot interrupt the course of the proceedings unless the Supreme Court issues a temporary restraining order, the prosecution said.

A pending petition also does not automatically warrant the suspension of proceedings, the prosecution said, citing jurisprudence.

Binay’s arraignment was initially set on November 20. It was moved to January 29 after her lawyer asked for a postponement as they plan to file a motion for reconsideration on the court’s decision junking Binay’s earlier move to stop the trial.

The graft and malversation charges against Binay stemmed from the alleged irregularities in the procurement of hospital beds worth P36.43 million for the Ospital ng Makati in 2001 and the purchase of P8.83 million worth of dry heat sterilizers when she was Makati mayor.