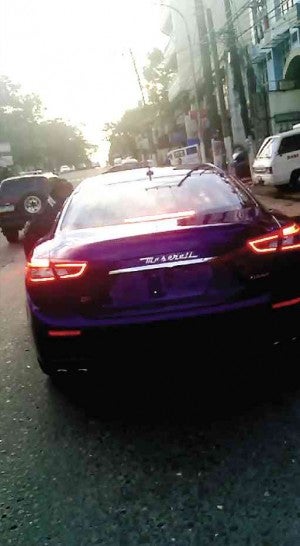 There are only a handful of motorists in the country who could be driving a Maserati, and one of them is the man who broke Jorbe Adriatico’s nose.

Adriatico on Thursday became the latest traffic constable of the Metropolitan Manila Development Authority (MMDA) to figure in a high-profile road rage incident, his case made more prominent by the pricey vehicle of the alleged aggressor.

Just hours after Adriatico filed a complaint, the Quezon City Police District (QCPD) tagged Joseph Russel Abacan Ingco, 39, as the driver of the blue Maserati who was encountered by the MMDA enforcer around 6:30 a.m. along Quezon Avenue.

QCPD director Senior Supt. Joel Pagdilao said Adriatico, when shown a picture of Ingco that was provided by the Land Transportation Office (LTO), positively identified the man as his attacker. Ingco is recorded in the LTO as a resident of New Manila, Quezon City, the official said.

Owing to the car’s rarity on Philippine roads, the QCPD didn’t have a long list to consider in its search for the suspect. Pagdilao said that based on information obtained from Wellington Soong, president of the company distributing Maserati cars in the country, only six of the Italian sports car had been sold locally—and only two are blue. Pagdilao said the number does not include Maseratis that may have been sold in the so-called gray market.

Speaking to reporters, Adriatico vowed to press criminal charges against Ingco for serious physical injuries, grave threats and assault on a person of authority.

Arriving at the QCPD Galas station with a broken nose and bloodstains on his uniform, the 39-year-old Adriatico said he was manning his post on Quezon Avenue when he saw a blue Maserati—which had only a conduction sticker—as it was about to make an illegal left turn to Araneta Avenue.

The MMDA constable said he approached to stop the “mestizo-looking” driver but the latter ignored him. This prompted Adriatico to take a video of the car using his mobile phone.

“He saw me taking a video, so instead of completing the left turn he went straight to the U-turn slot a few meters away, then stopped at the spot where I was standing,” Adriatico said in a separate interview with the Inquirer.

When the driver gave him the dirty finger, he said, he dared him to do it again—this time for the camera.

“He then snatched my phone, threw it into his car and then grabbed me by the collar,” he recalled. The driver stepped on the accelerator and dragged him for several meters, punching him thrice in the face before letting him go. During the assault, the driver repeatedly threatened to kill him.

“I did not fight back because I was afraid he would have me sandwiched between his car and the others that were on the road,” Adriatico said.

The complainant recalled that the driver had a male passenger in the front seat who tried to pacify the motorist.

Hours before the QCPD came up with the suspect’s identity, MMDA Chair Francis Tolentino offered a P100,000 reward for information leading to the driver’s arrest.

Tolentino, who vowed to file charges against the driver, noted that Adriatico was the latest on the growing list of MMDA personnel attacked by traffic violators.

He cited the earlier case of Geraldo Santiago, who was hit with a crash helmet by a motorcycle rider whom he flagged down in Quezon City last week.