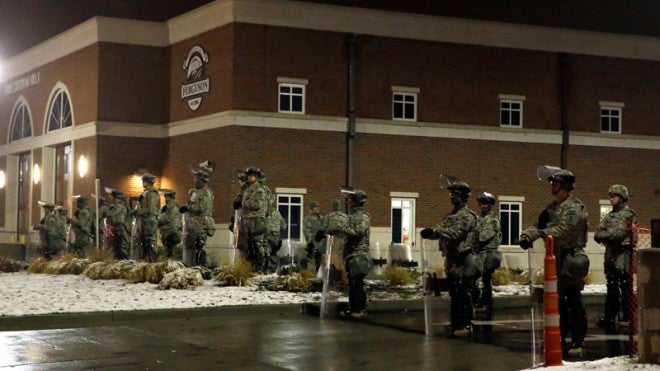 Missouri National Guard stand outside of the Ferguson Police Department Wednesday, Nov. 26, 2014, in Ferguson, Mo. A grand jury’s decision not to indict a police officer in the shooting death of an unarmed 18-year-old has stoked passions nationwide, triggering debates over the relations between black communities and law enforcement. (AP Photo/Jeff Roberson)

Protesters tried to storm St Louis city hall on Wednesday after two days of nationwide protests against the decision not to prosecute a white policeman who shot an unarmed black teenager.

Extra police and a National Guard Humvee were drafted to protect the building, as events in Ferguson, Missouri inspired coast-to-coast anger in America and even a rally across the Atlantic in London.

But, despite simmering fury over Officer Darren Wilson’s August killing of 18-year-old Michael Brown, there were signs that as night — and a light snow — fell on Ferguson the situation was stabilizing.

Volunteer clean-up crews, including children and families, were sweeping the streets of the St Louis suburb where on Monday and Tuesday angry crowds torched businesses and looted stores.

Heavy security — police, state troopers and National Guard troops — was still visible in the streets, but even Tuesday night had not seen the scale of destruction that followed Monday’s decision.

“I think generally it was a much better night,” St Louis County police chief Jon Belmar told reporters, despite a police car having been set on fire and more businesses having been attacked.

Beyond Ferguson, authorities were on the watch for more of the protest marches that sprang up across the country on Tuesday.

Many thousands of people joined demonstrations in dozens of cities — a relatively rare occurrence in America, and evidence that the case has struck a raw nerve in race relations.

On Wednesday, the movement jumped the Atlantic to Britain, where thousands of sympathizers angered by Brown’s treatment marched in London chanting the same slogan: “Hands up, don’t shoot.”

“We need to send a message to Mike Brown’s family,” said Carol Duggan, the aunt of Mark Duggan, a 29-year-old black man whose shooting by British police in 2011 sparked riots in London.

US civil rights leaders have called for more protests on Saturday.

In Ferguson, where the National Guard presence was tripled to 2,200 on Tuesday in a bid to quell violence, residents said on the eve of Thanksgiving that they hoped looting and arson would stop.

“I agree you can have your right to say what you feel like saying but when you go beyond that, I do not agree with that at all,” said John Adams, who works at a car care center that was damaged.

“We’re kind of out of a job right now until this is done,” he said.

“I think if you’re going to destroy stuff, destroy something of your own.”

“Thanksgiving is tomorrow and I hope we can pull together as a community,” Gold, who is white, told AFP.

“I want to move on from this.”

“We continue to ask for calm,” McSpadden said.

Brown’s parents however had harsher words for Darren Wilson, the officer who shot their son and said Tuesday he had a “clean conscience” about the August 9 incident.

The grand jury found that Wilson had shot Brown in self-defense after an altercation. A total of 12 shots were fired.

In his first televised comments since the incident, Wilson told ABC News he had feared for his life during the confrontation, believing Brown was attempting to wrestle his gun away from him.

The officer said he was comfortable that he had acted correctly.

“I don’t think it’s haunting. It’s always going to be something that happened,” he said, adding that his conscience was clear because “I know I did my job right.”

A visibly emotional McSpadden said on NBC’s “Today” show that Wilson’s remarks added “insult after injury” and were “so disrespectful.”

His father, Michael Brown Sr., said on NBC he felt the officer’s version of events was “crazy.”

“For one, my son, he respected law enforcement,” Brown said. “Two, who in their right mind would rush or charge at a police officer that has his gun drawn? It sounds crazy.”

The August shooting of Brown sparked weeks of protest and a debate about race relations and military-style police tactics.

The town’s community of 21,000 — which is majority black — has been on edge since the shooting, and residents complain of racism and heavy-handed tactics by the predominantly white police.

Lurking behind unrest in Ferguson, a housing and economic divide

Filipino-Americans join protest marches in US