MANILA, Philippines—The pork barrel lives on and the battle continues with the voters’ pen.

To end all forms of pork barrel, the People’s Initiative to Abolish the Pork Barrel System (PIAP) submitted to the Commission on Elections office in Quezon City folders containing the first 10,000 signatures from the city’s six districts.

“We gathered the signatures for two months from different communities, schools and factories in Quezon City since the launch of the campaign to abolish the pork barrel system,” PIAP-Quezon City spokesperson Malou Turalde said in an interview.

The signature campaign for people’s initiative to pass a law that would ban lump sums in the national budget was launched last August 25 in Cebu, a year after the massive protest against pork barrel in Rizal Park in Manila. 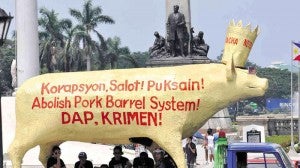 GOLDEN PIG AS NEW IDOL Members of organizations taking part in the “Stand Up, Sign Up” people’s initiative against all forms of pork barrel at Rizal Park in Manila take cover from the heat under a giant papier-mâché golden pig. INQUIRER FILE PHOTO

“If the people’s initiative becomes a law, all those who are guilty would be made accountable, even the president. After all, he has his own pork barrel,” she said.

The group should gather at least 177,000 signatures from Quezon City to contribute to the target of 6 million signatures nationwide, Turalde said.

“The immense challenge is to gather signatures of more than 10 percent of the total number of registered voters in the country, with at least 3 percent in all legislative districts,” she explained.

“Slowly but surely,” Aquino said. “But I think we have to gather more signatures. We are supported by the CBCP and other groups so I think gathering of signatures will soon be faster. We really need the support of the people,” he added.

Turalde said the gathering of signatures has been slowed by the need to educate the people first on the pork barrel issue.

Quezon City may not be the first to submit the signatures because others “just want to be quiet. We want to do it with a bang because it’s not just about the submission of the signatures but letting the people know, making them understand what the pork barrel system is about,” she said.

The group holds house to house campaigns, mass gatherings, orientations in schools. Their goal is to reach the target of 6 million next year or before the elections. But Turalde said they have been making sure that all those who signed have registered as voters.

The Comelec would need to verify and certify the sufficiency of the signatures. Then, the proposed people’s initiative bill would be put to a vote through a nationwide referendum.

“Our problem is the Comelec seems unready,” Turalde said.

Aquino added that based on their monitoring, the Comelec offices in the different cities and municipalities “do not know what to do with the signatures.”

Quezon City Acting Election Officer IV Enriqueta D. Danieles said the submission of people’s initiative signatures “is of national significance. We have to endorse it to the Comelec en banc.”