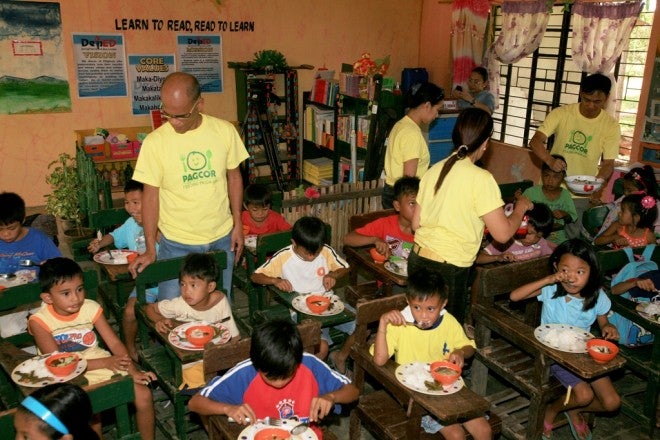 Employees of the Casino Filipino Laoag branch assist the beneficiaries of the PAGCOR Feeding Program during the project’s launch in Naguilian Elementary School in Nueva Era, Ilocos Norte. PAGCOR allocated more than P42 million for its nationwide feeding program for School Year 2014-2015.

MANILA, Philippines—The Philippine Amusement and Gaming Corporation (Pagcor) has allocated more than P42 million for its nationwide feeding program for the school year 2014-2015 as part of its continuing efforts to help the government combat malnutrition among Filipino children.

Pagcor said about 10,000 undernourished students in various public elementary schools nationwide are expected to benefit from the said program.

“The Pagcor Feeding Program beneficiaries will be fed with complete, nutritious meals for 120 days to help them attain their ideal weight and to also improve their overall health and wellbeing. We are giving priority to schools with high incidence of “severely wasted” or “wasted” pupils (considered the poorest of the poor) in areas where the Pagcor properties are located,” said Reyes.

Action Contre la Faim, or ACF International, which carries out the “Action Against Hunger” campaign in 45 countries, said that “severe wasting” is characterized by massive loss of body fat and muscle tissue.

“Wasted” children, on the other hand, are those with moderate acute malnutrition.

“So far, our feeding project has already benefitted close to 38,000 public elementary students in more than 500 public schools since we launched it in July 2010,” Reyes said. 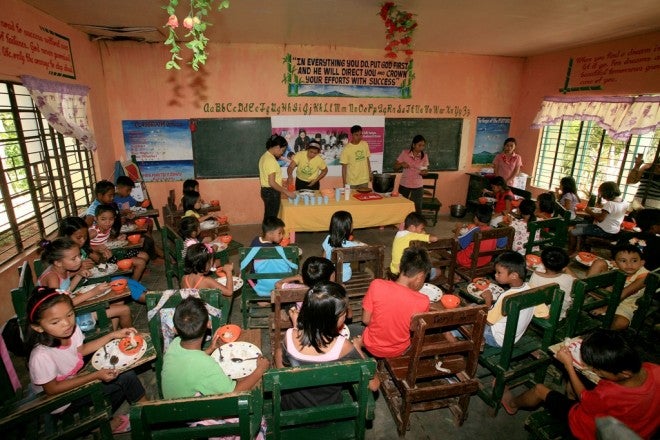 The PAGCOR Feeding Program will provide the students of the Naguilian Elementary School in Ilocos Norte with complete, nutritious meals for 120 days to help them attain their ideal weight and improve their overall nutritional condition.

Romualdo Pascua, principal of Dingras West Elementary School in Ilocos Norte, said the agency’s feeding program will improve the health of the school’s 130 “severely wasted” and “wasted” students whose families could not afford to feed them.

Another school that is benefitting from the program is the Naguilian Elementary School, 50 kilometers away from Laoag City. Its officer-in-charge Marites Remos said more than half of their 125 students severely lack nutrition.

Many of their students are identified as “severely wasted” like nine-year-old Eilahnia who only weighs 16 kilos. She weighs 10 kilos less than the normal weight of 26 kilos for children her age. Remos said Eilahnia had learning difficulties.

Eilahnia said their family rarely eat meat or fish. What they usually eat is rice with boiled vegetable leaves and “bagoong.” The Grade 4 pupil was thankful that she was chosen as one of the beneficiaries of the Pagcor Feeding Program. At least now, she said, she can already eat one complete meal every day for the next five months.

Meanwhile, Karen Ignacio, a nurse at the Casino Filipino Laoag branch, hopes that the students will improve their weight and nutritional state through the feeding program.

“Our target is for our beneficiaries to reach a healthy weight at the end of the program. Kung hindi man mataas, at least maiangat natin sa border ‘yung timbang,” she said.

Ignacio is one of several Pagcor employees who voluntarily assist in the agency’s feeding sessions during her spare time.

Fight vs malnutrition gets boost from Pagcor

Your subscription could not be saved. Please try again.
Your subscription has been successful.
Read Next
‘Senator Estrada is Cong. Biazon’
EDITORS' PICK
ACT slams Edca on 124th anniversary of PH-American war: ‘Tila hindi umalis ang mananakop’
Philippines central bank to focus on inflation at next policy meeting – governor
Only 38% of students grade 1 to 3 prefer local language as medium of instruction — Pulse Asia
House energy committee chair Arroyo bats for cheap electricity
Omega Speedmaster super racing: Tiny device massive change
vivo Philippines offers a free bouquet of flowers and a premium necklace perfect for Valentine’s Day
MOST READ
Pokwang admits she lied about cause of split with Lee O’Brian: ‘Umasa akong aayusin pa niya’
Vice Ganda asserts all is well with Karylle, takes swipe at ‘kuya’ who chimed in to be ‘trending’
Immigration detention head, 35 others sacked over foreign detainees’ VIP treatment
OWWA chief Arnell Ignacio: Socmed manager behind post on my love life
Don't miss out on the latest news and information.