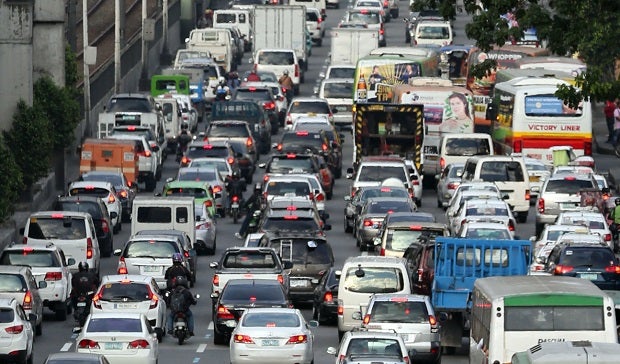 MANILA, Philippines—Operators of shopping malls located along Edsa have agreed to adjust their operating schedule for five weeks to help ease traffic during the holiday season.

In a meeting on Friday with the Metropolitan Manila Development Authority (MMDA) at the SM Mall of Asia in Pasay City, the operators signed a manifesto adopting the so-called “open late-close late” scheme that sets their store hours at 11 a.m. to 11 p.m., starting Nov. 28 to Jan. 3.

With this change from the usual 10 a.m.-9 p.m. (or 10 p.m.) schedule, the MMDA assumes that the movement of commuters or motorists heading to or pouring out of malls is less likely to aggravate rush-hour traffic in the early morning or early evening. Traffic volume on major roads in Metro Manila, especially on Edsa, swell by 15 to 20 percent during the holidays, according to the agency.

The 15 malls located on Edsa agreed to the new schedule, including Trinoma, Farmers Plaza, Robinsons Galleria and Pioneer, SM Megamall and SM Mall of Asia, among others.

MMDA Chair Francis Tolentino noted the collective “sacrifice” on the part of the mall operators. “This is the first time they will do this and the move will surely alleviate the traffic situation in Metro Manila during the holiday rush,” he said.

Dollie Bufi, regional operations manager of Robinsons, said she doesn’t expect the new schedule per se to affect the malls’ income or sales since the number of operating hours would remain the same.

“It is for the benefit of the public and our consumers, so it should be easy for us to make the necessary adjustments,” Bufi said.

However, Paul Santos of the Philippine Retailers Association raised a concern: “The changing of the schedule for more than a month will certainly raise our cost.”

“There is one consequence for us, for example. If our employees are made to work beyond 10 p.m., we are required to pay them a night differential which is a cost implication for us,” Santos said.

But Santos said he only wanted to raise this point on behalf of his association. “Since they (mall operators) have agreed, we retailers will go with the idea and hope that the (MMDA) chair’s proposal will help improve Metro Manila traffic.”

Malls make Christmas a season of joy and giving