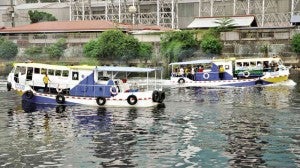 The river ferry will operate from 5 a.m. to 6 p.m., with an additional hour from its regular schedule running from 6 a.m. to 6 p.m., to service more passengers especially those who will do their Christmas shopping in Divisoria and Escolta in Manila, according to MMDA Chair Francis Tolentino.

“We are doing this in anticipation of the Christmas rush. I am optimistic this will help ease traffic jams, specifically in areas where shopping malls and bazaars are located,” Tolentino explained on Thursday.

The MMDA chair added that they would further extend the operating hours of the river ferry service starting Dec. 16, the start of Simbang Gabi (Dawn Masses), to aid passengers who will be hearing mass at the Sta. Ana and Sta. Cruz churches in Manila.

“The ferries will start its operations as early as 4 a.m. by Dec. 16 to offer traffic-less transportation to churchgoers,” Tolentino added.

The Pasig River ferry system now has nine boats with a maximum capacity of 30 passengers each and fare ranges from P30 to P50 depending on the destination of the passengers.

Tolentino did not say until when the extended operating hours for the Pasig river ferry will remain but he said these would be in effect throughout the holiday season.

Aside from this measure, the MMDA also earlier ordered a moratorium on road repairs and excavations on all Metro Manila roads starting Dec. 15 to Jan. 6 next year.

On Wednesday, the agency released Memorandum Circular No. 11, which temporarily suspended “all excavation activities in all metro roads right-of-way like road re-blocking works (including restoration activities by utility companies), drainage improvement and all other excavation works that will obstruct smooth traffic flow.”

Tolentino, however, said that major infrastructure projects like the NAIA Elevated Expressway, flood interceptor catchment project of the Department of Public Works and Highways (DPWH) and emergency leak repairs or breakage of water lines have been exempted from this moratorium.

He also urged project contractors to cover ongoing diggings with steel plates and remove equipment and materials along roads to make these streets usable for motorists.