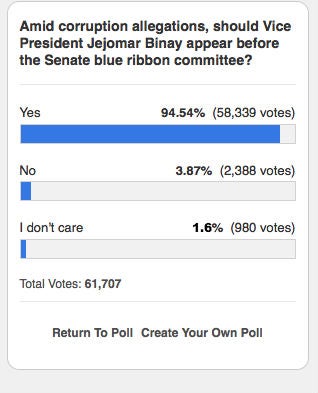 MANILA, Philippines—Vice President Jejomar Binay should face the Senate probe and answer the allegations of corruption hurled against him, according to a recent survey of INQUIRER.net.

The question posted in the online poll was “Amid corruption allegations, should Vice President Jejomar Binay appear before the Senate blue ribbon committee?”

Nine out of 10 (or 94.54 percent of 61,707 total respondents) were in favor of Binay’s appearance in the Senate committee hearing.

The results of the INQUIRER.net poll echoed the findings of a recent Social Weather Stations survey wherein eight of 10 respondents said they wanted Binay to attend the Senate hearing.

The Senate blue ribbon committee is currently looking into the allegedly overpriced Makati City Hall Building 2 which was built when Vice President Binay was the city mayor.

Binay has repeatedly snubbed the Senate invitations. He also backed out of a debate with Senator Antonio Trillanes IV, who initiated the investigation.