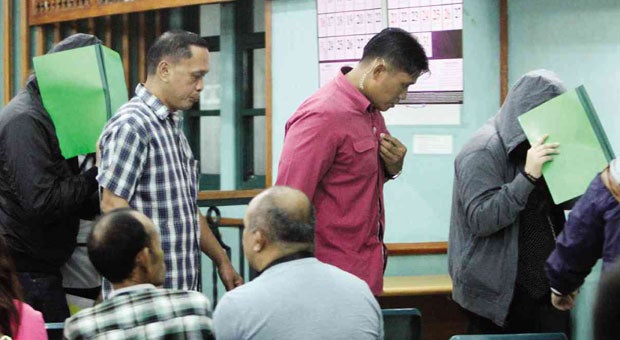 UNDER COVER Jo Christine Napoles (right) and James Christopher Napoles (leftmost) show up wearing hoodie jackets and hiding their faces behind paper folders at the Sandiganbayan for their arraignment on Wednesday. The two are children of Janet Lim-Napoles, alleged mastermind of the P10-billion pork barrel scam. LYN RILLON

After their failed attempts to avoid prosecution, the daughter and son of suspected pork barrel scam brains Janet Lim-Napoles were finally arraigned in the Sandiganbayan on Wednesday over the alleged misuse of P345 million in pork barrel allotments of detained Sen. Juan Ponce Enrile.

Jo Christine Napoles and her younger brother, James Christopher Napoles, both refused to enter a plea for the 15 counts of graft filed against them by the Office of the Ombudsman in the antigraft court’s Third Division.

Accompanied by their lawyers and private security escorts, they arrived about 30 minutes ahead of the 1:30 p.m. proceedings.

Both wore hoodie jackets similar to the jacket their detained mother had been wearing to her bail hearings in the Sandiganbayan.

They covered their faces with folders as they avoided television crews and photographers who had waited for them outside the courtroom.

In his attempt to avoid reporters, James Christopher accidentally hit his head on the front door of the courtroom.

“Of course, they didn’t want to be (ridiculed by the public) if the media captured their faces. Nobody would want that,” Stephen David, one of the siblings’ lawyers, told reporters after the proceedings.

Asked if Napoles’ children were afraid, David said: “They’re not. They know we can defend them.”

Asked by Presiding Justice Amparo Cabotaje-Tang, chair of the Third Division, what her plea was, Jo Christine said in a muffled voice: “Your honors, upon the advice of my counsels, I refuse to enter any plea.”

David said the defense opted not to enter a plea because of pending motions in the Supreme Court filed in connection with the criminal cases filed against the Napoles siblings.

Tang entered a not guilty plea for the six accused.

“After the (criminal) information was read to the accused … the court hereby enters a plea of not guilty for them pursuant to the Revised Rules of Court,” Tang said.

Tang reset the arraignment of another accused, Mylene Ogerio, to Dec. 5 after her lawyer informed the court that the defense was planning to appeal the court’s finding of probable cause against her.

Associate Justice Samuel Martires warned Ogerio and her lawyer that they were just wasting their time in seeking a reconsideration, as the Ombudsman was already determined to pursue the cases against everyone tagged in the P10-billion pork barrel scam.

“So if you want to expedite this case, forget the filing of the motion for reconsideration,” he added.

No knowledge of scam?

In an interview, David maintained that the Napoles siblings had no knowledge of the operations of JLN Corp. and the foundations that their mother allegedly used to siphon off billions of pesos from the Priority Development Assistance Fund (PDAF) in connivance with some lawmakers.

Government witness Marina Sula, one of the whistle-blowers in the PDAF scam, earlier testified that Napoles’ children were among those who forged the documents pertaining to the projects funded by Enrile’s pork barrel allocations.

“At the time, they were just students. They also had their own businesses,” David said.