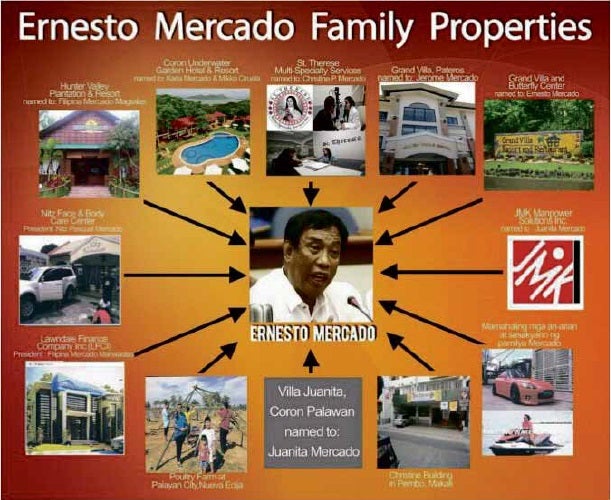 COLLAGE OF CORRUPTION? The Binay camp releases a photo collage showing formerMakati City Vice Mayor Ernesto Mercado at the center and properties worth over P1 billion he allegedly owns.

The United Nationalist Alliance (UNA) is claiming that Olivar is a relative and longtime employee of Mercado, the main whistle-blower against Binay.

UNA said Olivar was one of Mercado’s fronts in companies he used to corner P1 billion in government contracts and amass businesses and sprawling real estate, including an entire island in Palawan province, but showed no documentary evidence, apart from a document showing ownership by the former vice mayor of one firm, Twinleaf Group.

Navotas Rep. Tobias Tiangco, UNA’s interim president, dared Senators Aquilino Pimentel III, Alan Peter Cayetano and Antonio Trillanes IV that if they believe Mercado’s claim, they should compel Olivar to surrender to the government all properties under his name.

Pimentel is chair of the Senate blue ribbon subcommittee which is conducting an investigation on Binay’s alleged ill-gotten wealth. Cayetano and Trillanes are members of the panel.

“It is a mystery why the Vice President will use as a dummy the constant companion of Mercado who also once rode on a helicopter with the staff of Senator Cayetano which took the video of Sunchamp last Nov. 2,” Tiangco asked in a statement, referring to the vast estate in Rosario, Batangas province, purportedly owned by Binay.

“It’s really funny for VP Binay to take one person who is not only a longtime employee of Mercado but also most likely his relative,” he added.

In Tuesday’s hearing of the subcommittee, Mercado read an affidavit of Olivar who claimed that a 150-square meter unit in The Peak condominium in Makati under his name was owned by Binay.

Olivar, 44, a geodetic engineer like Mercado, said in an interview with the Inquirer on Wednesday said he was “a partner and a good friend of Mercado, not his dummy.”

“What I know also is my name was used as owner of a condominium unit supposedly belonging to Vice President Jejomar Binay more than 10 years ago,” Olivar said.

“Apart from this condominium unit, I have no knowledge of any property under my name on any property of Mercado,” Olivar said.

Tiangco said The Peak unit was actually used and owned by Mercado as his residence with his former live-in partner Racquel Ambrosio, the daughter of the late comedian Babalu.

“On April 24, 2002, Ambrosio died from a gunshot wound to the stomach when the couple had a violent domestic squabble. A day after the incident, Mercado, being the prime suspect in the murder, surrendered the gun that killed Ambrosio. Later on he admitted to the police that he cleaned the crime scene,” Tiangco said.

In an Inquirer report of the crime, Mercado claimed that Ambrosio, 24, could have killed herself because she was suffering from a postnatal syndrome after giving birth to their son three months earlier.

Tiangco claimed that aside from working as a surveyor of Mercado’s firm, Freeway Surveying, Olivar was also on the board of Twinleaf Group Inc. which cornered more than P1 billion in infrastructure and other projects in Makati during Mercado’s term as vice mayor.

“Mercado used a dummy at that time so his ownership was kept hidden until after he lost to Junjun Binay (the Vice President’s son) in the 2010 elections. But now, Mercado and his children have openly declared their ownership of the company (Twinleaf). In fact, he was even able to corner projects from the Department of Agriculture,” Tiangco revealed.

Tiangco expressed surprise at how Mercado could have bought an entire island—the 100-hectare island property Underwater Garden Hotel and Resort in La Jala, Coron, Palawan, which would be the venue for this year’s Miss Earth International Pageant to be held next week.

“Where did these riches of Mercado come from? These are lodged in the names of his children, wife, second wife, in-laws and siblings. These are the evidence that he enriched himself in office,” Tiangco said.

“He admitted getting kickbacks. His wealth is the fruit of his corrupt ways. If he does not surrender these assets, then his donation is just a gimmick. What is a few hectares compared to his lands in Nueva Ecija, Makati, Laguna and Palawan?” Tiangco said.

The Inquirer sought Mercado for comment, but aides said he was out of town.

In the interview with the Inquirer, Olivar dismissed Tiangco’s claim that Mercado owned an island in Coron worth P1 billion. “I have known him since the ’90s and I have not heard any island worth that much that he owned,” he said.

Referring to The Peak unit under his name, he said: “I will not claim something (that is) not mine. Besides, I know who the real owner of the unit, it’s Vice President Binay.”

He said it was only recently that he discovered the unit was still in his name. “I thought the ownership had already been transferred because they asked me to act as dummy more than 10 years ago,” he said.